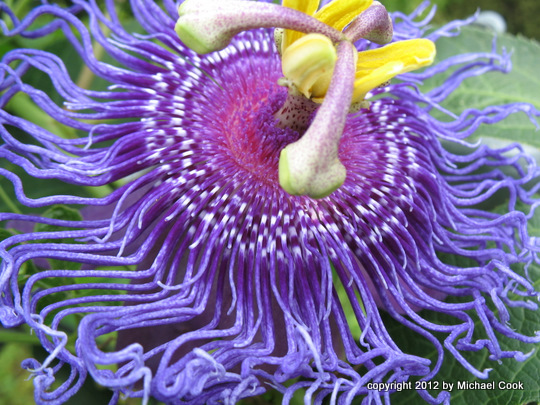 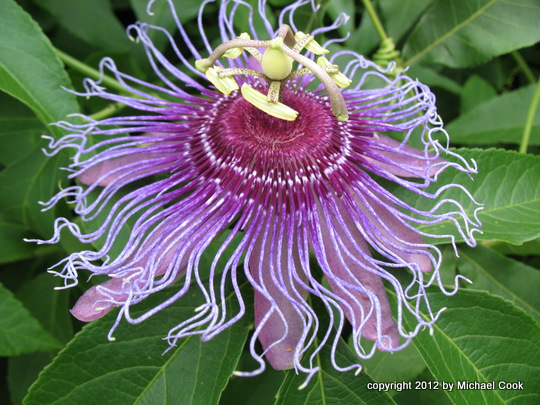 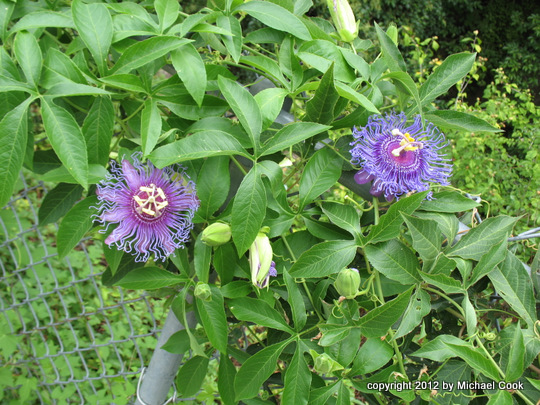 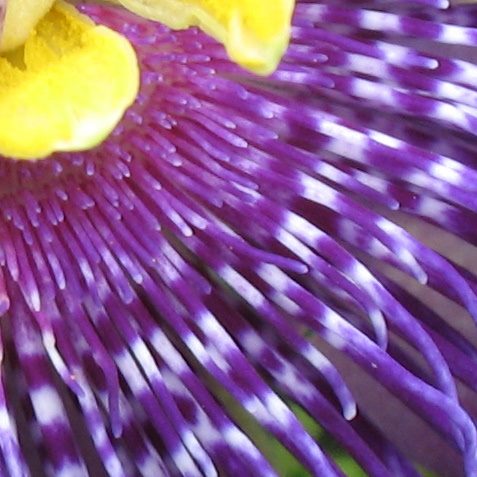 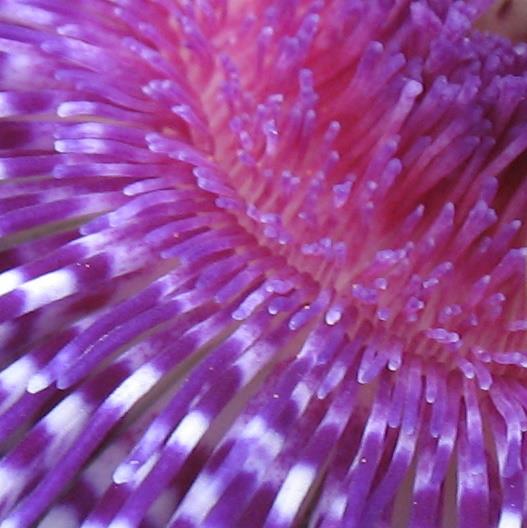 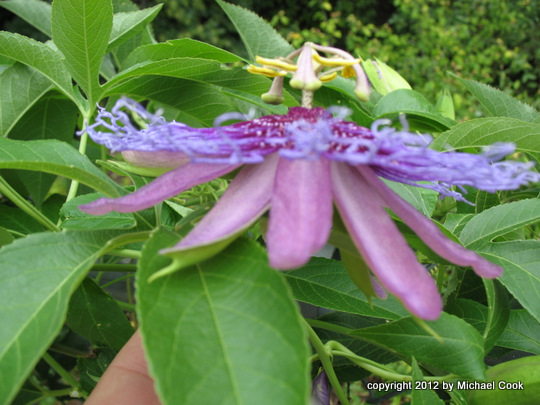 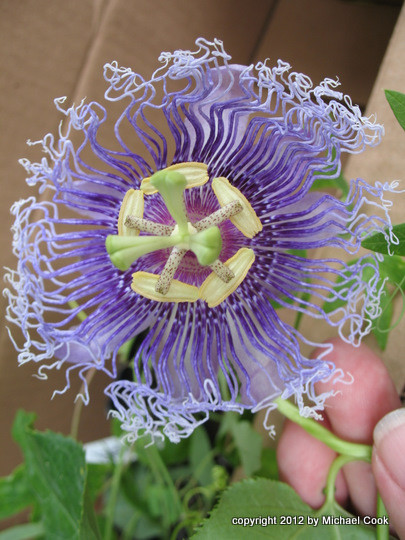 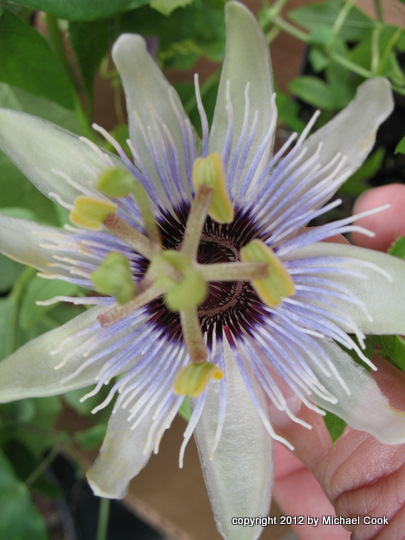 The composting worm bin lives in the upstairs bathroom adjacent to my office/studio room.  So when things get weird in the bin, I know about it.

I think that I picked up earwig eggs when I added compost from the outdoor compost bin – I always do this to help stock up the micro-flora.  However it happened, I started getting more and more earwigs.

The pincers look fierce, but aren’t actually pinchy from what I can tell.  They stink a lot if squashed.

There are lots of them.  They thrive on the same kind of vegetable waste that I feed the worms, and they’ve reproduced like mad.  Of course, my options for insect remediation in the compost worm bin are quite limited.

Traps are usually the best.  I looked up how to trap these guys, and most of the sources pointed to a similar technique.  A straight-sided can, like soup or tuna, with a mixture of equal parts of molasses (or corn syrup), vegetable oil (with the possibility of a drop of added bacon grease, for fragrance attraction) and soy sauce.  Because of what I got hold of in the cabinet first, I’ve tried a couple of different oils.  It’s amazingly effective. 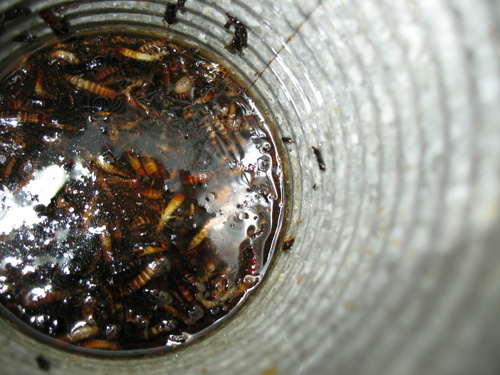 This is five or six days worth of earwigs.  They mostly end up in the trap overnight, as they are nocturnal.  I let it go a few days, then tip the oil out in a non-agricultural part of the yard (the chickens declare the bugs delicious!) and refill and reset.  Apparently it works in the garden or house as well.

I have a very definite niche.  Many of the things that I do, not a lot of people do.  And, I document most of what I do – with lots of pictures, which I post online.  So, when people are searching the web for something related to my unusual interests, they often find my pictures.  Then, if I’m lucky and they’re polite, they write me and ask for permission to use the pictures.  I usually say yes, although it’s case by case; sometimes there’s even a little money involved, or a contributor’s copy of a cool book or magazine.  I’m particularly likely to say yes if it’s for a museum supporting science, or for educational materials for schools – the only exception is if it’s for a religious organization promoting pseudo-science.  I think that teaching creationism to kids is an insidious and very damaging form of child abuse.  Sorry about the soap-box, but it’s something I’ve run into hard a couple of times.  If you want to tell children that God made silkworms for the express use of mankind, I respect your Constitutional freedom to say so – but I also have a right to sue if you use my copyrighted pictures without permission.

This time, it was a writer with Scientific American’s website; he was looking for some images to support an article on metamorphosis.  So, now, I’ve got a photo on their website, with links back to mine – and it’s a very cool article!

The article with my photo

This is not a paid ad.  I have received no promotional support for this endorsement – I just think these things are cool, and want to tell my friends.

We live in a lovely, wooded area of south Dallas.  We back up to the confluence of two year-round creeks, Crow Creek and Five Mile Creek.  This gives us a fairly lush vegetation, full of towering trees and wildlife – but it also gives us lots of bugs.

I hate spraying chemicals.  I use a few organic pesticides for the vegetables, but I also use a lot of old-fashioned, low-impact non-chemical solutions.  I catch grasshoppers in a net and feed them to the chickens; I encourage the wasps to eat caterpillars from the passionflower vines.  And starting this year, I started using Skeeterbags.

I had read about these last year, but didn’t get around to ordering them.  I tried a home-spun version involving tulle netting and duct tape… let’s just say, I decided that the price of the commercial version was definitely worth the cost. 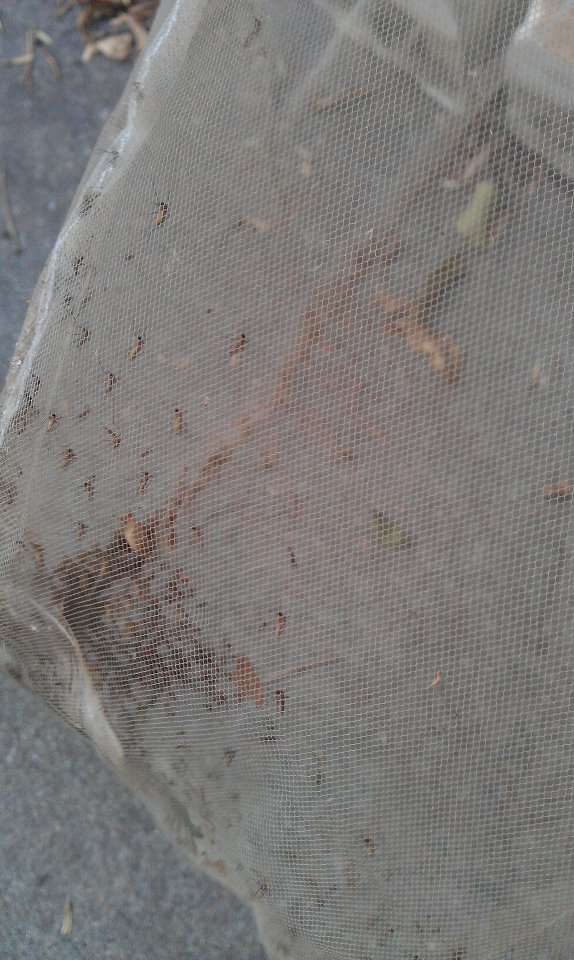 Basically, it does just what it says on the box.  They’re easy to attach to a standard cheapo-model box fan, and they kill usually between 100 and 200 mosquitoes a night.  One is next to the chickens’ house, and the other is next to the garage. 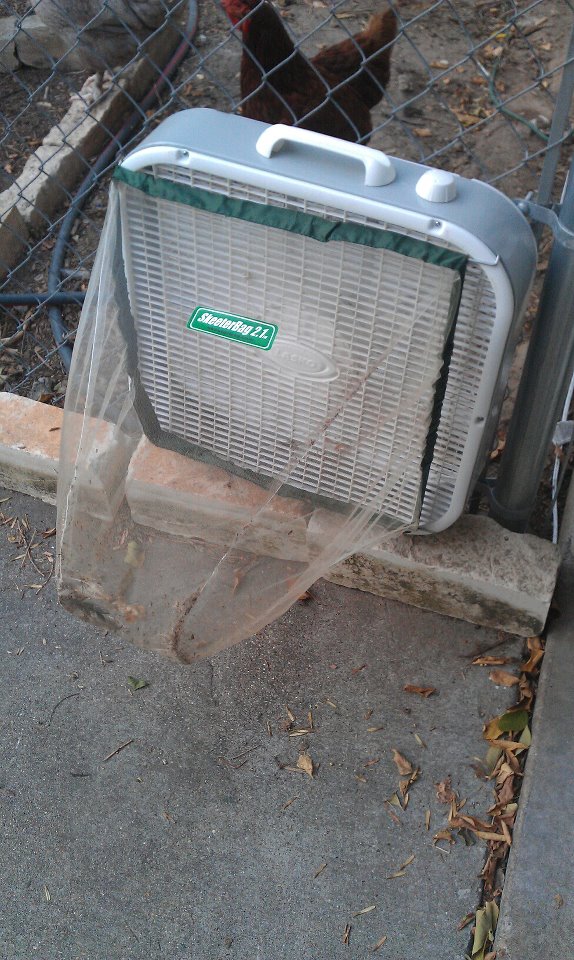 The mosquitoes are all hanging on to the side of the netting first thing in the morning; by noon, they’re dried up and dead.   Every few days, I empty out the little pile of corpses.  They have definitely made a significant impact on the yard’s population.  Living next to year-round water, we’re never going to be mosquito-free, but we’ve gone from “I’m being eaten alive if I step out the door” to being able to walk over and check on the chickens without getting bitten.