It’s been an exceptionally good season.  We had a warm, mild spring, followed by an unusually wet summer – so everything is green and lush!

I’ve been a fan of passionflowers for a long time. I have begun seriously collecting the hardy varieties, focusing on flowers and fruit.  Many of the new hybrids are cold-hardy for our Zone 8a garden, and the plants that I put in the ground last year and year before last, are really kicking in. 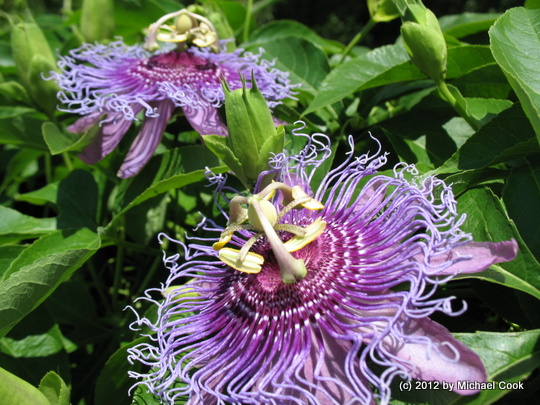 The biggest vine in the yard is Passiflora “Incense” – it is the first one I planted, and it has really thrived.  Sadly, it doesn’t make fruit – but it sets usually 30 to 50 of these flowers every day.  They’re usually between 3″ and 4″ across. 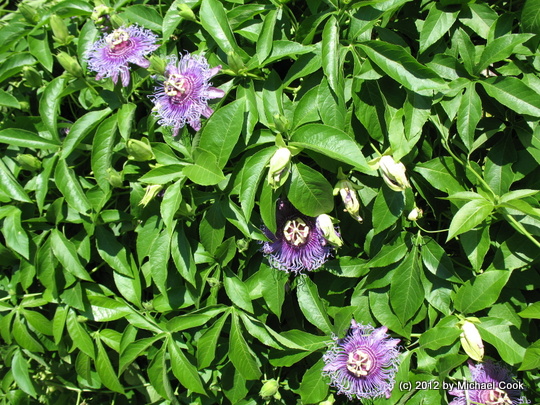 You can see how vigorous the vine is – it’s this solid across about fifteen feet of fence. 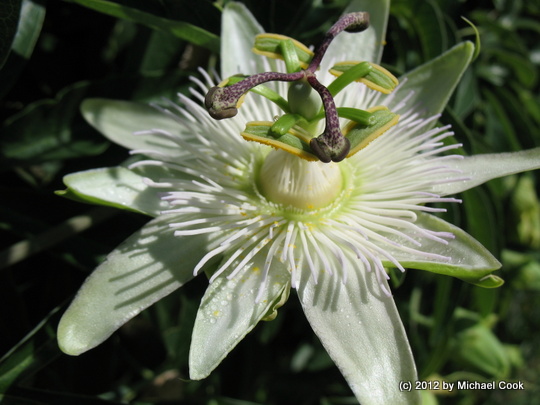 P. “Constance Elliott” is a color sport of P. caerulea; it is exceptionally hardy, and also has a sweet fragrance, especially in the evenings.  I love the water on the petals – it’s something that this species just does.  Except for the driest, hottest days, these flowers look like they’ve been freshly dew-kissed.  The buds actually drop water if you bump them.  Tennyson wrote in Maud, “There has fallen a splendid tear / From the passion-flower by the gate.” I like the idea of splendid tears. 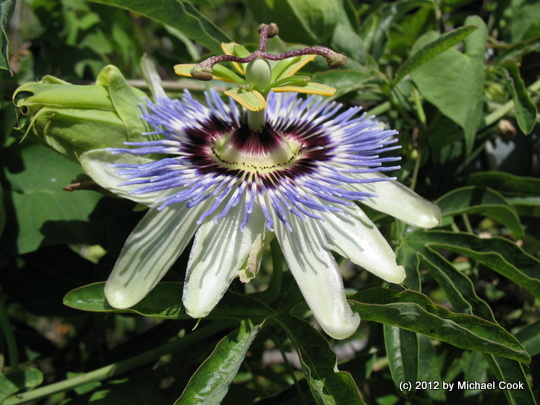 This is P. caerulea, the species.  The plant is doing OK, but not as well as the Constance Elliott – I think that the location doesn’t allow it quite as much enriched soil to dig in to.  I’ve put alpaca manure on it, which has helped a lot.  Sadly, the fruit is fairly insipid – it tastes almost more like a vegetable than a fruit. 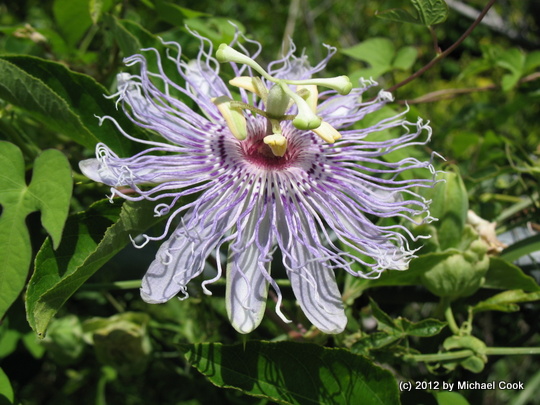 P. incarnata, the native species, is my favorite for fruit.  You can read here about foraging them on the freeway verge, and making jelly.

We had some surprise seedlings – I didn’t realize that Chris had re-used some peat pots I had (unsuccessfully) tried planting passionflower seeds in.  When he planted tomato seeds and put them on the heat mat, the heat caused the passionflower to germinate. These flowers are from the sprouts from this spring!  He made these bamboo and string trellises for them.  So far, haven’t gotten any fruit, but they’re working on it. 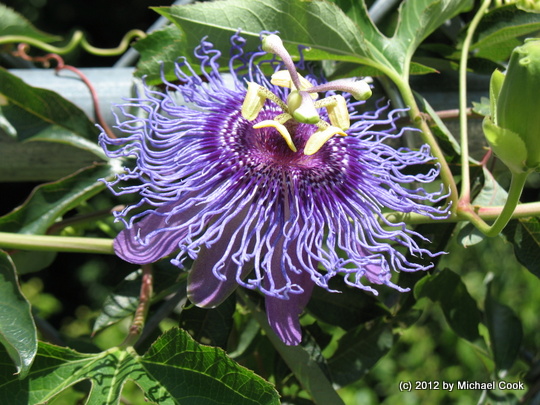 Along the lines of fruits and flowers – I’m also growing some new hybrids.  This is P. “Temptation X Temptation.”  It’s a tetraploid – which means that it has been manipulated to have double the number of genes.  This tends to yield very vigorous plants.  I’m hoping that they prove cold-hardy here; we’re on the edge of their zone tolerance.

This delicate and beautiful white flower is from P. “Bill’s Delight” – which I got by mail-order, and was doing really well until it just turned brown in the stem and died from the base upward.  I don’t know what got to it.  I’ll probably get another one this fall, and try it again; the flower is really lovely. There are other white P. incarnata sports that are supposed to have more fruit (this one has more flowers, fewer fruits) and I’ll probably try one of those as well. 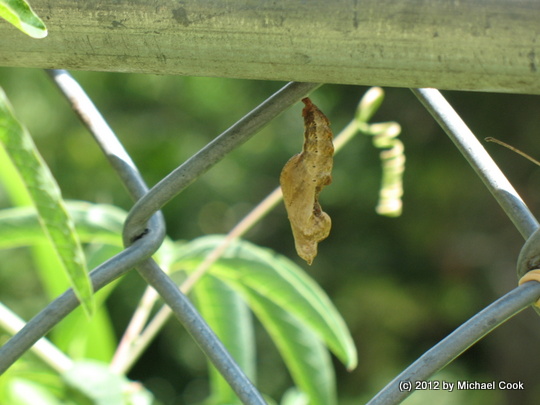 With passionflowers, we always get plenty of these – this is the chrysalis of a Gulf Fritillary, Agraulis vanillae.  Unfortunately, I have to use some organic insect spray against them to keep them from totally stripping the vines.  They can have any on the back of the fence, and I have the ones on the front of the fence.

Gulf Fritillary on the lantana.  This shot is from last fall, but we’ve had lots this summer as well. 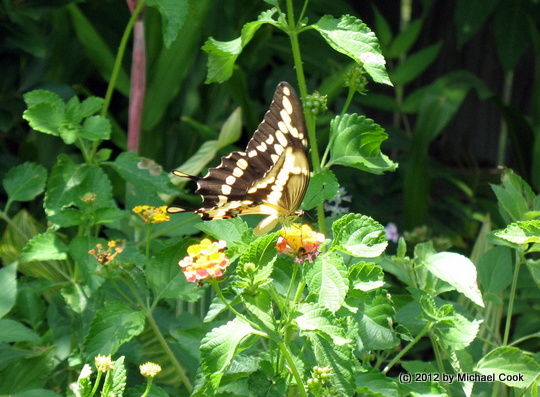 This Giant Swallowtail, Papilio cresphontes, really loves the lantana.  It doesn’t sit still very well, though!  Every picture of it was blurred somewhere. 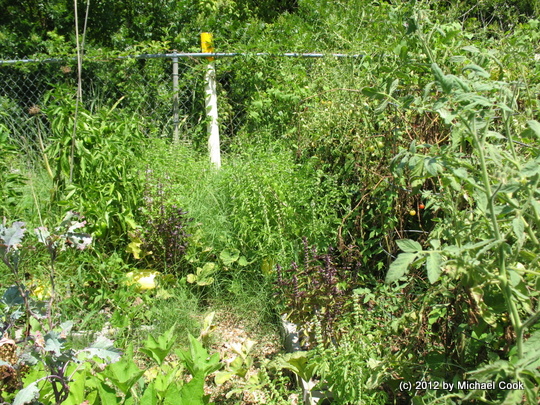 With all the rain, the basil is doing great, we’ve got lots of squash and tomatoes… but also lots of bermuda grass and weeds.  It’s just too hot to spend much time weeding.

Summer is usually a slow time for silk work.  I’ve got a couple of wild native species caterpillars going, but no China silkworms, and not a lot of projects in the chute.  But in March, I took my silk show on a live news show, to drum up interest in the Dallas Handweavers and Spinners Guild‘s booth at ArtsPark (link to the video).  The show went very well, and I’m pleased with the visitors we saw at ArtsPark. 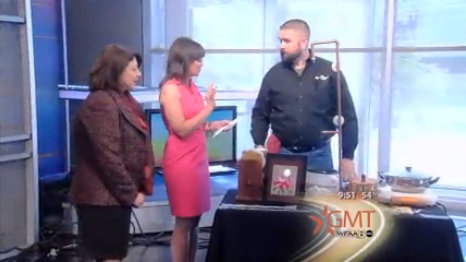 I got busy, and caught up in other things, and I realized that I haven’t posted here since February, and it’s now mid-July. I realized that part of it, is that I’ve been posting quick photos to Facebook, rather than writing things out; my new phone makes it easy to make those quick updates, but more difficult to make blog posts.

So, it’s time for a little catching up! I’m going to put up a couple of condensed posts.

Update on the chickens –

Sue was a very good momma. She mothered the little babies around the yard, making sure they were eating and thriving. However, we learned that the yard is not the right place for chicks. One got trampled by the other hens. Three got eaten by hawks. So, we learned that lesson, and the next batch of chicks was raised in the brooder box, upstairs in my bathroom. I wish we could have grafted them on to Sue, but they were days too old when we got them, and it just wouldn’t work.

We got these chicks at about a week old, on April 29. There are six, with three different kinds: two each of Salmon Faverolles, Anconas, and Andalusians. Between these three varieties, they should have a good production of eggs around the calendar. We knew that it was too many to keep; we sold off two of the chicks and one of the laying hens to make enough space in the coop. We’re still having some issues with the flocks not integrating – the young flock roosts separately at night on top of the compost bin, and I have to go tuck them into bed.

May 28, at about four or five weeks, they’re fully fledged, just about ready to go outside.

We sold one of the Anconas, one of the Andalusians, and Weezie.  We kept both the Faverolles, one Ancona, and one Andalusian.  The Faverolles are cuddly chickens – they’re easy to pick up and hold, and they don’t run from us.  It worries me a little bit, that they might not be smart enough to hide from a hawk or a bobcat – but so far, they’re OK.

I need to get some more new photos; they’ve grown so much since these were taken at the end of May!