I had tried putting fertile eggs under Sue back in December.  Unfortunately, I made a rookie mistake, and so did she.  I didn’t change her food when I put her in the broody box; a sitting hen needs a leaner diet than a laying hen, to prevent diarrhea.  What she did wrong, was fail to get off the nest to use the bathroom one time.  I imagine that you can see how these two things together led to a nest of very nasty eggs… and nasty eggs get infected with bacteria and don’t hatch. I didn’t post about it then, because it was sad and a let-down.

This time, both of us learned from our mistakes.  I changed up her diet, and moved her off the nest every day to do her business.  When I was on a teaching trip, Chris had to move her.  She sat eight French Marans eggs, five of which developed.  Yesterday, they began making faint plaintive peeping noises to one another and to Sue through the egg shells.  Today, she has five cute fluffy babies!

You can see four of them in this picture.  She’s still keeping them quite close up under her, but all five are fluffy and moving around. 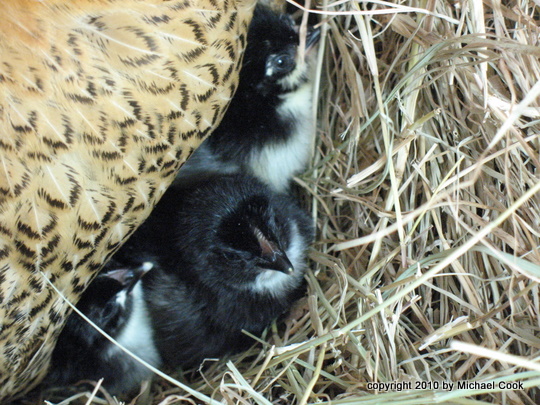 You can see the egg tooth on the center one, a little. 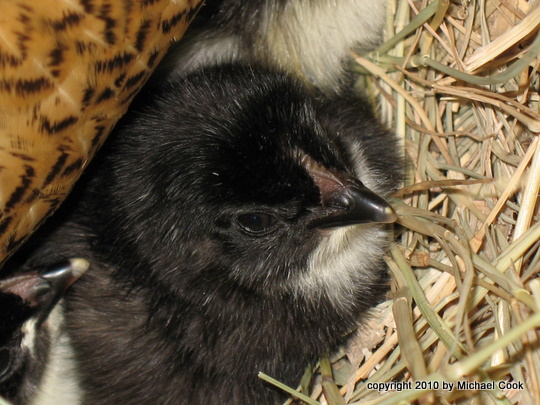 You see the egg tooth better in the close-up.

Sue is fussing with the chicks, and fussing at me. Watch for the one that peeks out from the back side! This was early in the day, when I was still trying to figure out how many chicks there were.

And this is what happens if you tick off a mother hen. The clank that you hear partway through is me adjusting a lamp; Sue did not care for that. Fortunately, her pecks are more of a flying pinch than a stab… she hasn’t drawn blood or really hurt me, yet, although from the look in her eyes, blood remains an option.

Chicks rearranging themselves. The background is a little red, because I turned on the red brooder lamp to give them a little warmth. The bathroom where I’ve got the broody box tends to be cooler than the rest of the house.