The tomatoes are doing well. 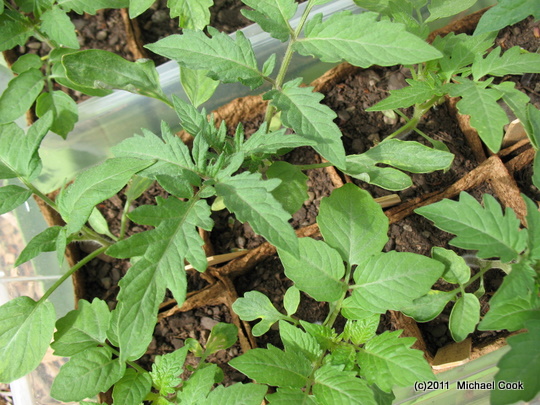 These were planted the 23rd of January.  They’re doing quite well in their four-inch pots.  I kind of wish I had started them earlier, but by the same token they’re easier to manage when they’re not huge… and there are a lot of them.  I’m going to share some with friends, and also some with Garden Club folks.  Rainbow Garden Club is doing a plant booth at the Earth Day Festival in Oak Cliff, and I’m going to donate the rest for that. We’ve still got most of another month before tomatoes go in the ground, and by that point, I’m sure they’ll be plenty big. 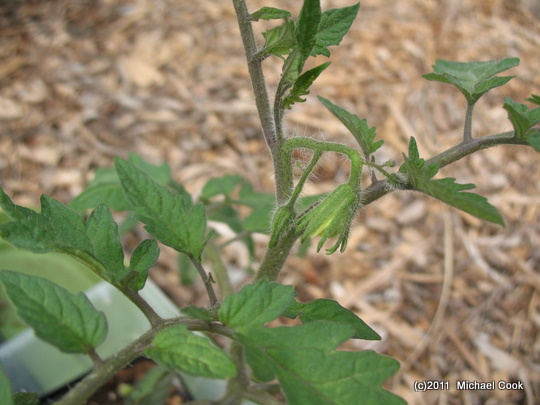 The ones my Dad gave us were planted on the first of December; I picked them up in early January.  They’ve already got flower buds on them! 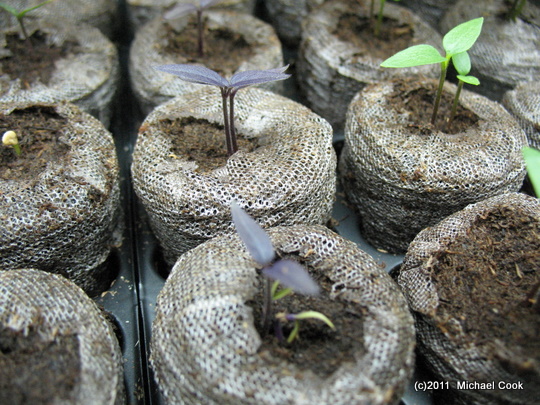 I planted nine different kinds of peppers, too.  I know, now, that I should have started them two weeks ahead of the tomatoes – but I didn’t know that then.  The purple-leaved ones really make me happy.  There are Grande Jalapenos, “Fooled You” Jalapenos (a non-hot Jalapeno for those of us who have digestive challenges and can’t take the heat…), “Explosive Ember” ornamental, “Royal Black” ornamental, “Chilly Chili” ornamental, Big Birtha bell peppers, “Bolivian Rainbow” ornamental… and something else I can’t remember without checking tags.  Oh, and a dozen of the white tomatoes that we enjoyed so much last year; a cherry plant called “Snow White.” 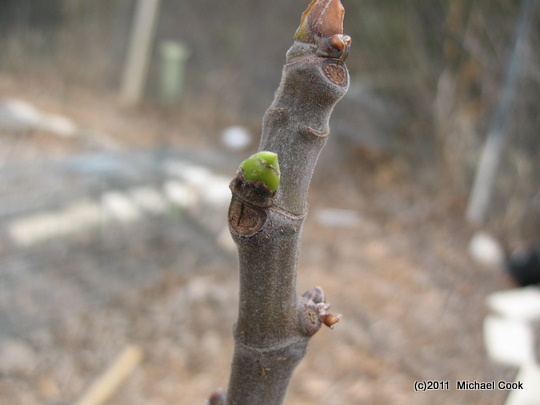 The perennials and shrubs are starting to put out some new growth; this is a green bud on Chris’s fig tree. 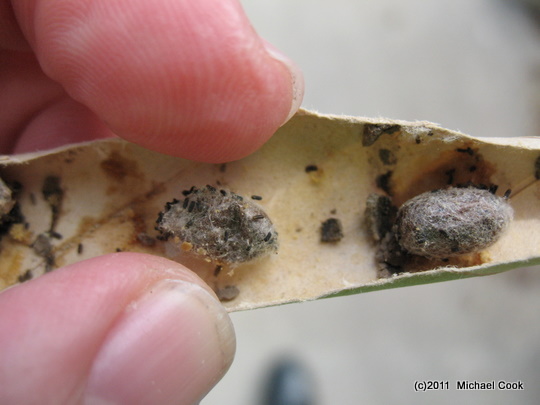 I got some Mason bees from North Haven Gardens.  They’re a super pollinator; because they don’t clean themselves as thoroughly as honey bees, and the pollen sticks to their hairy bodies, 1 Mason bee can do the pollinating work of 120 honey bees.  They’re called Mason bees because they seal up their tube-homes with mud, but I like to think of them in little fez hats and ceremonial robes, calling one another Exalted Grand Master and High Poo-bah.  This is a tube of their cocoons; they are kept in a refrigerator, and they hatch once they get out and warm up. 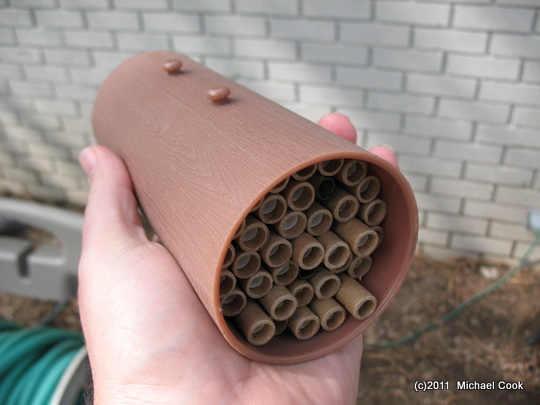 This is the house they will build their little tube nests in.  The bees naturally nest in hollowed stems of certain kinds of plants, but this gives them an ideal situation. 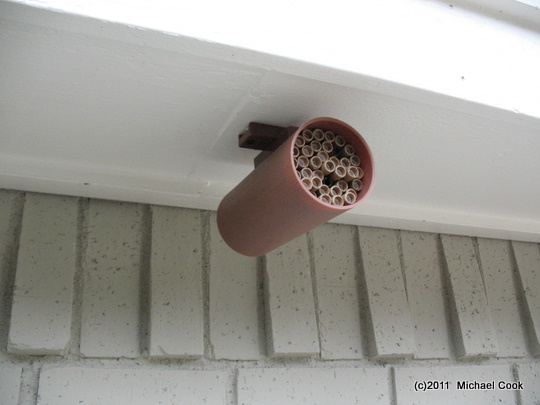 I mounted it up under the eaves of the house, so that it wouldn’t get rained on. The two dark-ended tubes are the ones with the bee cocoons in. 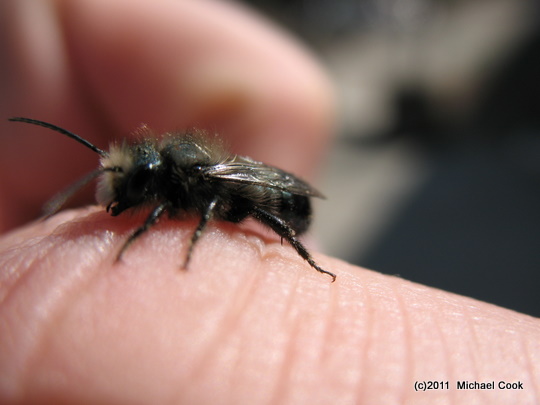 As I was putting the tubes of bees into the house, this little bee crawled out.  After walking around on my hand for a while, he (she?) took off.  Note the super-fuzzy body and head – this is what gives the bee its super pollinating power! 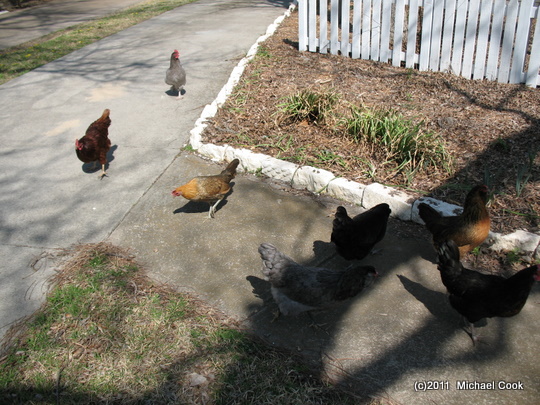 The chickens took a brief stroll in the front yard this afternoon. You don’t need a leash to walk your chickens… just a handful of cracked corn. 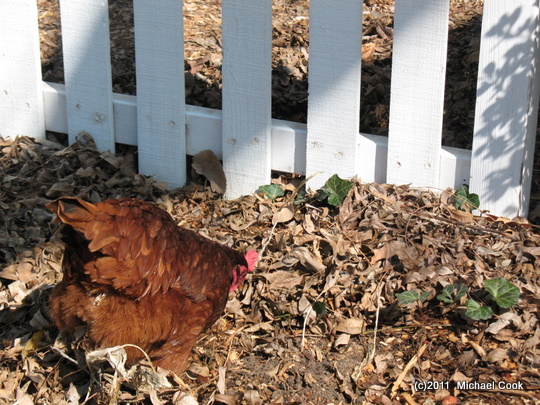 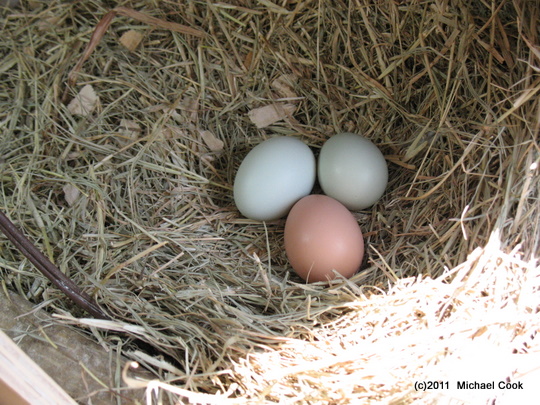 I got one egg early this morning; these are #2, 3, and 4.  Nowadays we are getting four or five each day.  Jumbo Ginger is taking a break, and Sue is just getting back into laying, but five eggs a day certainly keeps me happy. 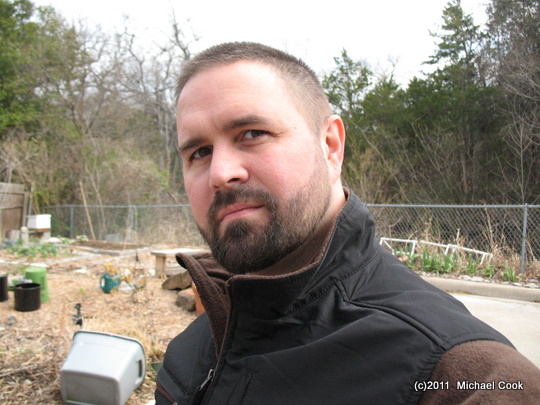 After growing it both my beard and my hair for a couple of months, I decided that it was a pain in the butt, a lot of extra maintenance, and a cause of a lot of sweat.  I decided to keep the beard, but much shorter, and went back to a short buzz on the head.