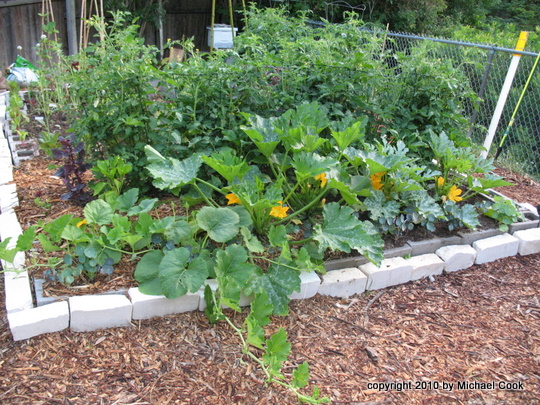 Unfortunately, today’s crop are all boys!  I need to learn how to make the stuffed-and-fried version; I understand they’re quite a tasty treat. 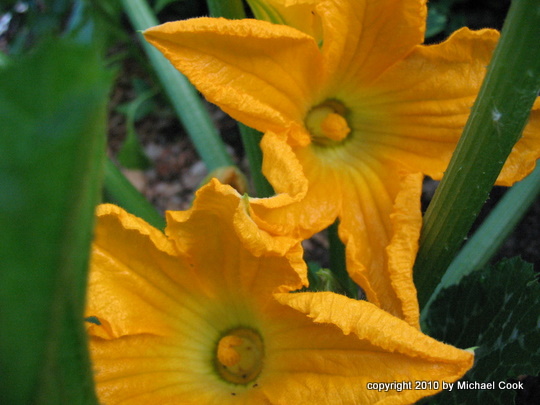 Looking closer, there’s something in them… the bees are still asleep this early in the morning, but the blossoms already have visitors. 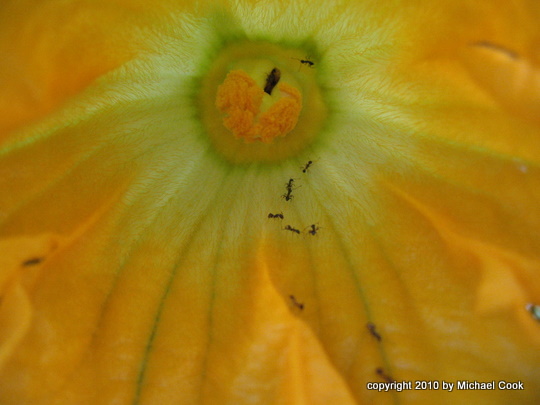 Ants.  Tiny ants are visiting the squash blossoms.  I hope they are tracking pollen!  There’s a little opening at the base of the flower; it almost looks like a secret ant clubhouse. 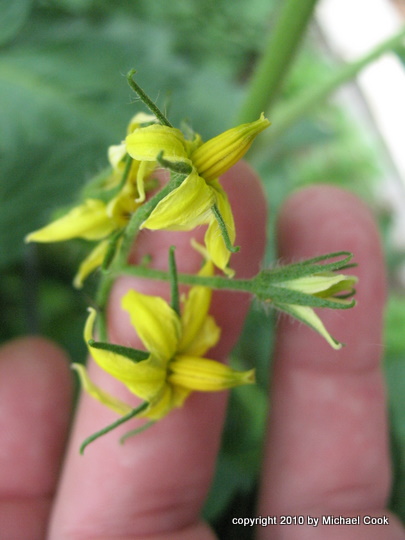 Most of the tomato blossoms look like this.  This is a Better Boy plant; its blossoms come mostly in clusters of four or five, while the cherry and grape plants put out clusters of six to a dozen. 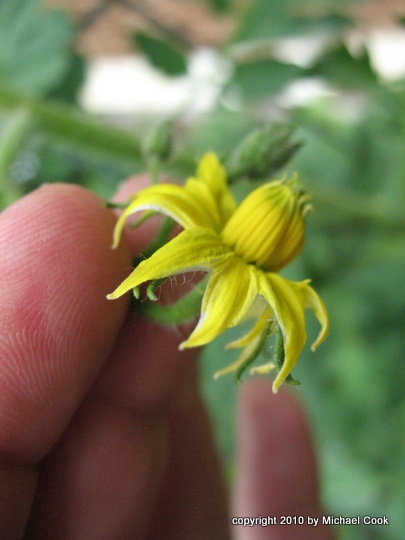 But on one plant, many of the flowers look like this.  They’re not double, in the sense of having two rows of petals – they look like two flowers worth of stuff packed into one flower.  This is still a Better Boy – same seed packet as the first one, growing in the same bed.

Then some of them (on that one plant) look like this.  Anybody know what’s going on there?

It doesn’t seem to be stopping the plant from setting healthy fruit, but they do have a slightly more ridged texture.  The brown mark appears to be just a little bit of schmutz from the remains of the flower, I don’t think it’s blossom-end rot.  We’ll see what we get… as they say, the proof of the pudding is in the eating.  Hopefully they’ll taste OK! 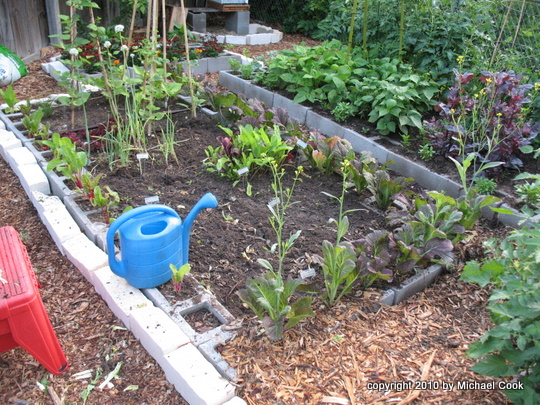 I pulled the Shanghai bok choi and the remainder of the spinach, radishes, and salad mix.  Once we started getting ninety-degree afternoon temps, the lettuces all turned bitter and started bolting.  I had envisioned saving the seed from the bok choi, but then I learned that members of the cabbage/mustard family can all hybridize, and we’ve got a strong population of wild mustard in this part of Texas – I’d be much better off getting fresh seed this fall.  I put in seeds for more squash and some more of the purple orach.  I am planning to pull the rest of the mustard and plant some seeds for grain amaranth and pearl millet.

Because we’re doing the garden organically, I’m particularly on the lookout for pests.  These are squash borer moths.  Their eggs (you can see two of them, near the center of the photo) will hatch out into hateful little grubs which will chew their way into the squash stems and hollow them out, killing the whole plant for a small bite.  We’ve been spraying the squash with BT (Bacillus thuringensis, a natural insecticidal bacterium), but I figure any moth I can catch with a butterfly net equals 100 to 200 little caterpillars I don’t have to worry about.  They are a wasp mimic, and it’s amazing how well-ingrained the “don’t touch that, it stings” instinct is.  These two are in a little plastic tub, awaiting execution by pecking squad.  The verdict: the chickens declared them delicious.

My Grandmother Read to Me Bees Hatching Out
Scroll to top