Blog - Latest News
You are here: Home / BLOG / Uncategorized / My Grandmother Read to Me

There was this story my Grandmother read to me… it was a kids book, and I think the title included a family’s name.  This family moved to the country, and a dishonest man sold them a parcel of land that turned out to be a pond… and therefore useless.  Something happened that drained the pond, and the family suddenly had the most amazingly rich, pond-bottom soil.  They would do things like plant corn and ride the burgeoning stalks like hobby-horses as they sprung out of the ground, or plant pumpkins and race them across the fields as the vines sped along.  It was kinda creepy, in a way – fast-moving vegetables are rarely a good thing – but I grew up with that firmly ensconced in my personal mythos. Very, very Kansas.

And that’s a little how I’m feeling about the garden this year.  If things continue to grow at anything like their current pace, we won’t be able to reach the fruits to pick them.  And yes, I know, it will soon be hundred-plus days, and things will slow down.  But it’s SO COOL right now! 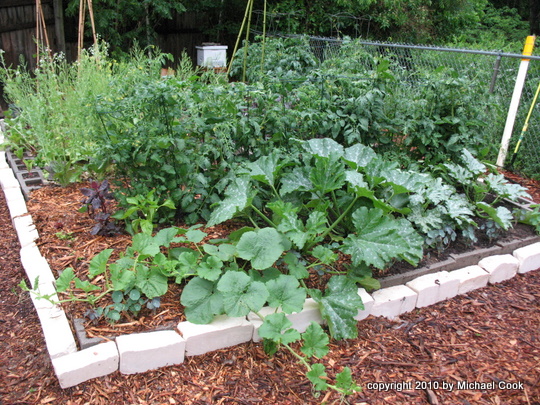 Front and center are the fantastic squashes.  They’re really zipping up; compare to the same shot eight days ago: 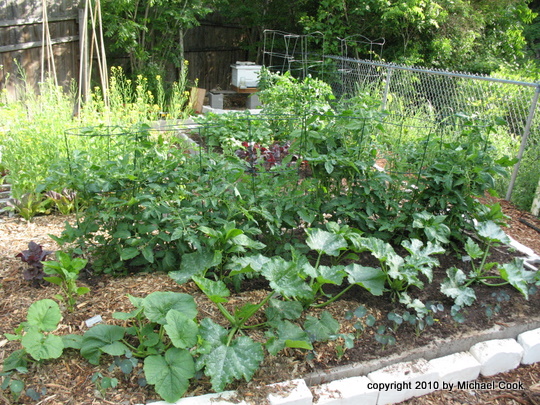 Eight good days, hey?   There are four kinds of squash; there are two spaghetti squashes (planted from seed we saved from a grocery store vegetable), then two Fordhook zucchini, then one round and one golden zuke. 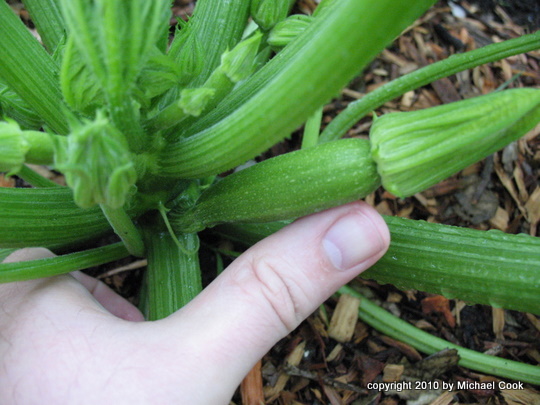 Even before they flower, the Fordhook zukes are about the size of my thumb. 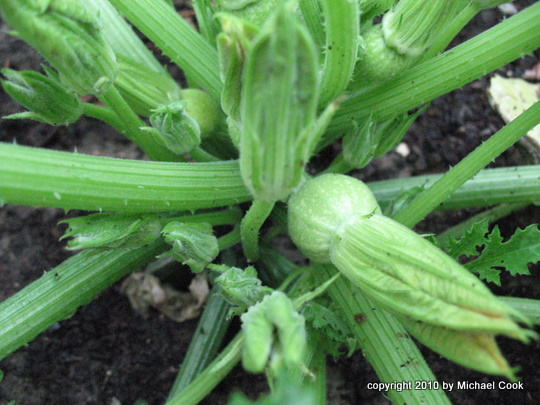 I’ve always thought these little round zucchinis are SO CUTE.  The plant is cute, too – much more upright and pert than the Fordhook, and covers less ground.  We’ll see if it beats the Fordhook in terms of squash-per-square-foot. 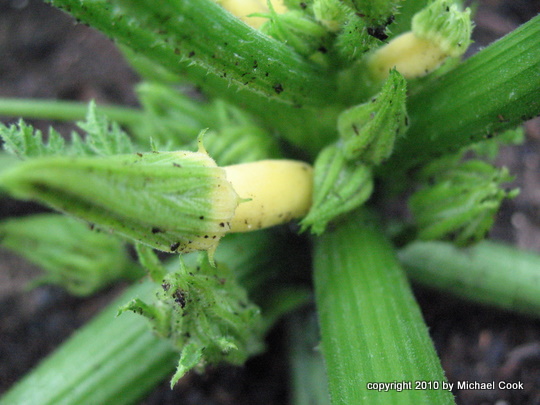 The golden zucchini.  These aren’t as big as the Fordhook, but I think they’re not quite as far along, either.  We’ll see! 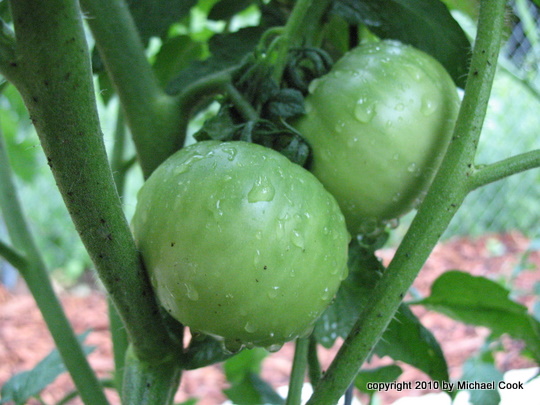 These tomatoes are still smaller than tennis balls, but not by much.  Perhaps the size of raquetball balls.  These are the Better Boy plants my Dad started from seed on December 1.   I have good hope of eating one before the end of May.  And no, we’re not fighting some horrible black-speckle fungus – we had a good hard rain, which splashed dirt on everything. 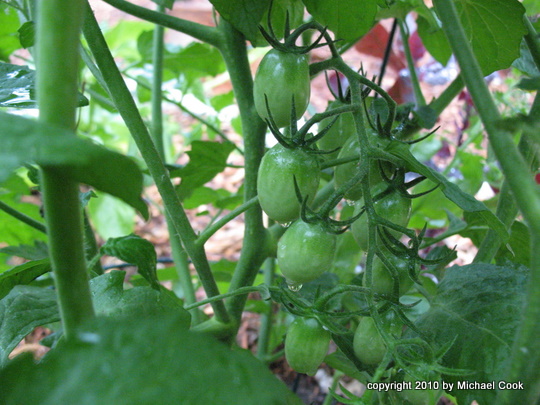 The grape tomato is the only, one, single tomato plant that we didn’t start from seed.  Chris and I love their sweet flavor for salads and snacking, so I had to have one.  Next time, hopefully, from seed.

The orach, or purple mountain spinach, has become one of my favorite vegetables.  It has provided a bunch of delicious greens (or purples?) already, and shows no signs of slowing down or bolting.  I’ll definitely plant this again next year. When sauteed, it releases a dark magenta juice that colors everything it touches, much like beets do. 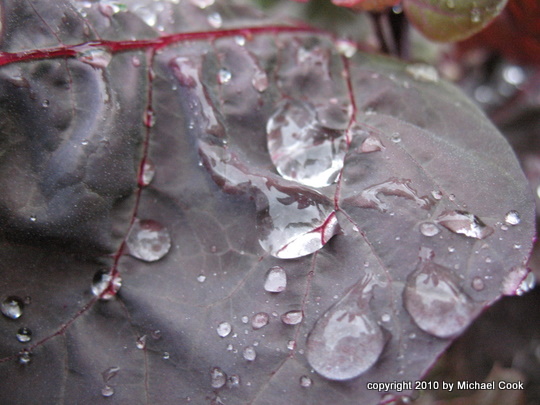 For some reason, its leaves repel water.  They never get wet.  It goes away when they’re sauteed, and it tastes almost exactly like spinach.  Mixing it with pasta and white cheese sauce and then topping with mozzarella and crumbled cotija anejo cheese yielded something that looked like blackberry cobbler, but tasted like starchy purple happiness.  I love cheese. Purple savory food was a bit weird. 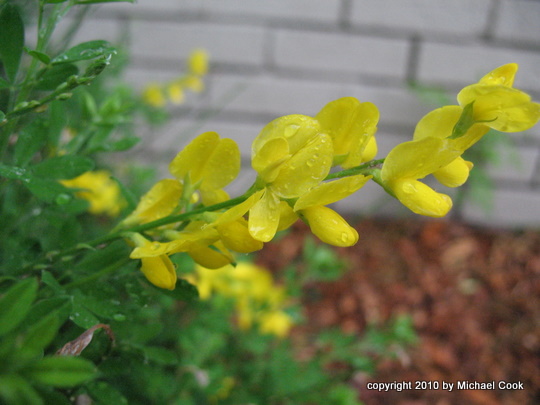 This is one of Chris’s favorite plants, a sweet broom.  The yellow makes him happy.  They had a huge flush in early spring, and now they’re reblooming; I hope they do it every year!

The herb garden is growing more slowly – this was a huge patch of weeds and Bermuda grass, which we covered with kill mulch.  This soil hasn’t been as much enriched and opened as the garden soil, but hopefully they’ll grow up and out with summer. 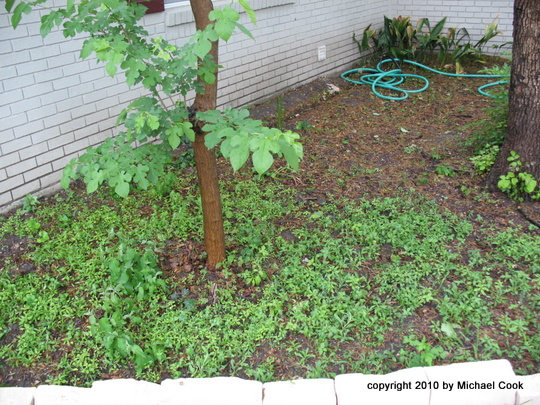 In front is a wildflower shade mix, another of the MANY things that we should have planted last fall, had we known.  Now, we know… hopefully we’ll still see some flowers before they get zapped by the summer heat.

A local plant nursery that usually costs about twice as much as most places, but has amazing things you don’t find at the other places, had these spectacular hostas in three-gallon pots for $10 each.  I wish I could have covered this entire area, but I got what I could.  This whole area gets about an hour of sun per day – unfortunately, at noon.  So far, they’re doing OK. 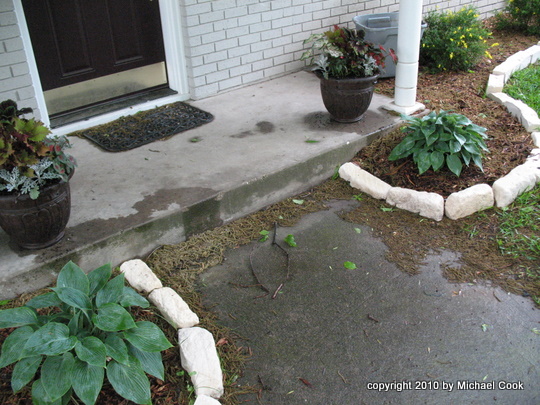 The other two of the hostas, flanking the front porch.  Chris put together the containers that sit on the porch; we’ll do annual colorful things in them, and hopefully they’ll grow well and we’ll remember to water them often.

Edited to add: One of my LiveJournal friends found the book; it’s McBroom’s Wonderful One Acre Farm.