The garden continues to thrive. I’ve been drenching the soil every two weeks with an aerated compost tea (thank you Chris for the bubbler!) with molasses and fish emulsion, and so far the only insect treatment we’ve used is BT. BT makes me really nervous – it’s effective specifically against lepidopteran larvae, like cabbage worms, squash borers… and silkworms. I give myself a Silkwood shower if I get the stuff anywhere near me, before I feed the Tiny Masters, and it’s never allowed near the mulberry. 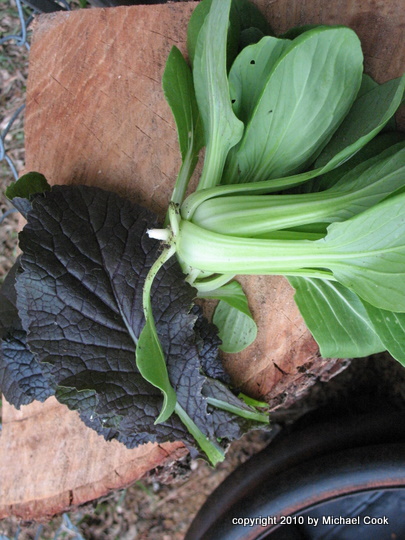 It was finally time to harvest some of the Shanghai bok choi. It was really good. The mustard is getting to the steaming-greens stage; we’ve been eating it as salad so far, but the flavor is getting a little hot.

The tomatoes are just going nuts. The big one on the right is one of the Better Boy plants that my Dad gave us that he started from seed. The one on the left is the only purchased plant in the whole garden – a grape tomato, because we love to eat those in salads.

The grape already has flowers and a couple of tiny set fruit. The Better Boys don’t have open flowers yet, but lots of buds. We’ve disbudded the first branching on one bed worth, because I read that can help strengthen the plant and improve overall yield; we’ll see what we get. 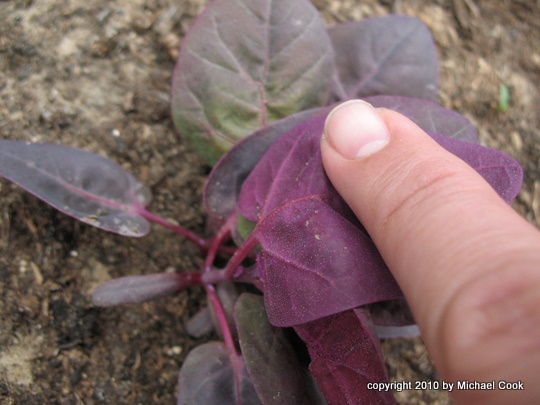 The purple orach, also called Mountain Spinach is growing well, and entirely purple. It really does taste remarkably like spinach, and what a color on the salad plate!

There are a lot of after-last-danger-of-frost things sprouting: 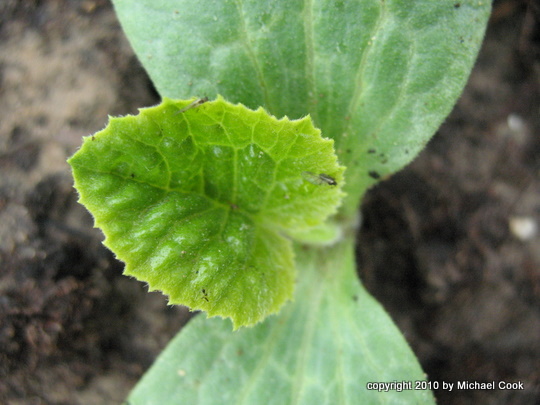 We planted three varieties of zucchini – golden, globe, and standard. I’m not sure what the tiny winged things are, but they don’t seem to be causing any damage I can see, so I haven’t taken any action against them yet. They’re much slimmer than aphids. 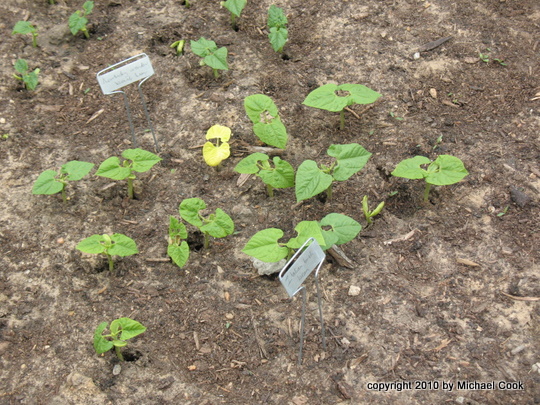 You can see pole beans sprouting in the back of Bed #1 at the top of the post; these are bush beans. We’ve got four varieties, whose names escape me at the moment, and I can’t see all the tags. Italian bush, Kentucky Wonder, and two more. 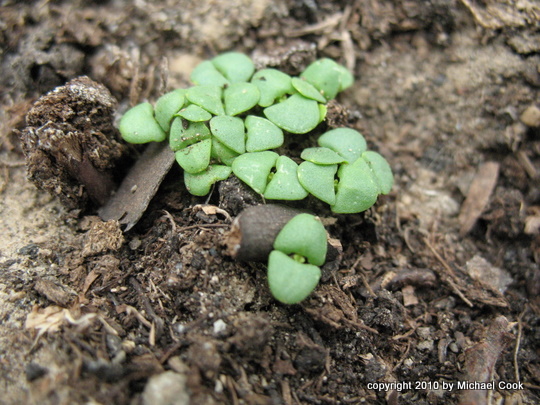 I planted a lot of basil in the cells of the cinder blocks; they don’t need a huge amount of root room, and they’ll make a good friend for the tomatoes. These are “Queen of Siam”; I alternated cells between this one and “Finissimo Verde a Palla” dwarf globe. The intended effect is decorative, but we’ll see what actually ends up happening. 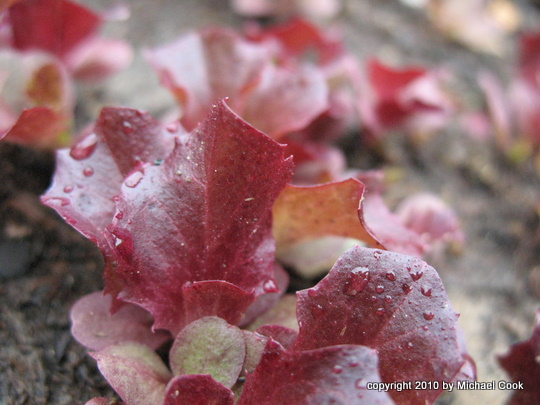 “Merlot” loose leaf lettuce. I’m hoping that if I can keep planting fresh salad greens, we’ll have salad at least into early summer. I’m not holding out hope that tender greens will thrive here in the heat of our Texas summers; it’s just too hot. 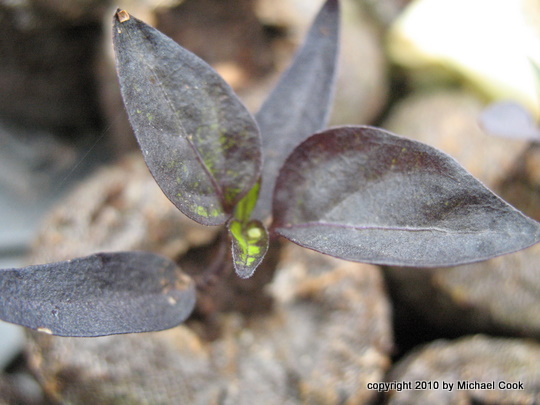 “Black Pearl” ornamental pepper. These are going to go in the Wicked Garden – they’re SO dark in the foliage, with purple flowers and pearly dark purple fruits that redden when ripe.