As I’ve said before, I LOVE getting packages from India.

This one is something that I have been looking for for quite some time. It’s a hand-loomed pure Kosa (Tasar, or Indian Tussah) silk sari. It’s BEAUTIFUL. Just a peek, before I let you see the package opening up: 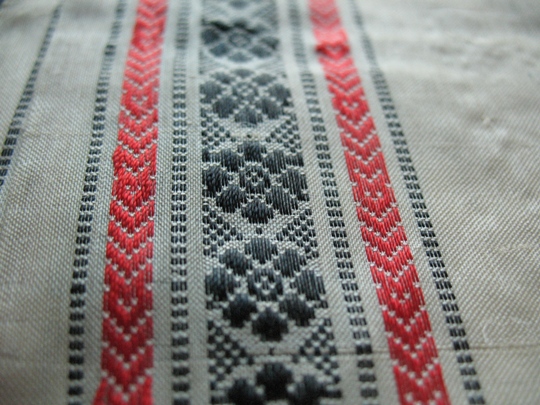 But, of course, what I see first, is this: 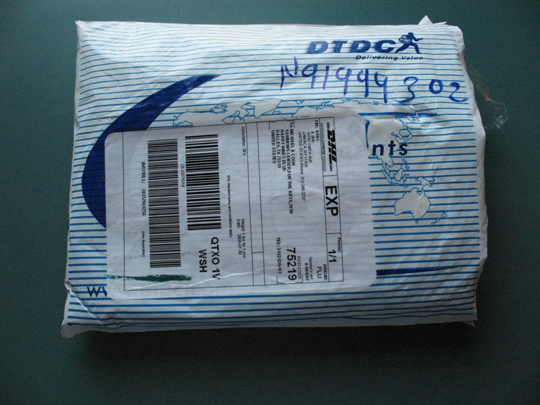 This one isn’t nearly as… intensely packaged… as some that I’ve gotten. 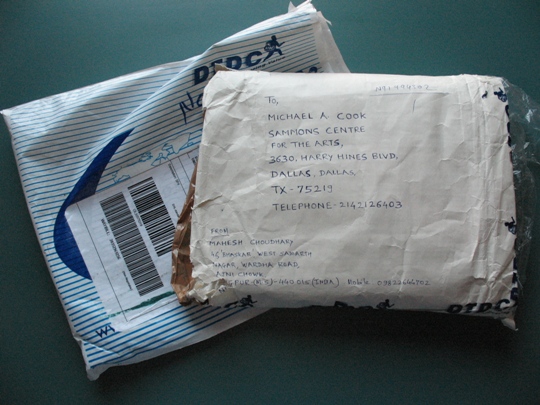 The inner packaging, with the same fiber-reinforced paper I’ve seen before. 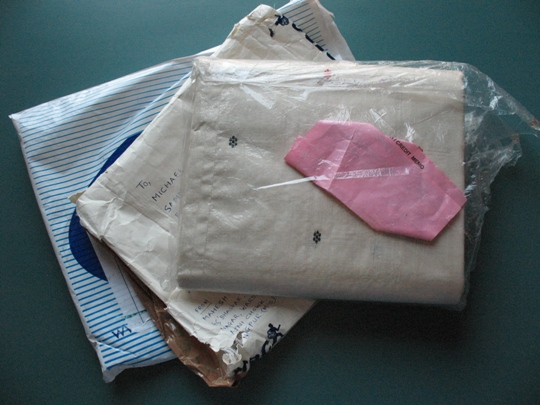 After that, there’s a plastic wrap. 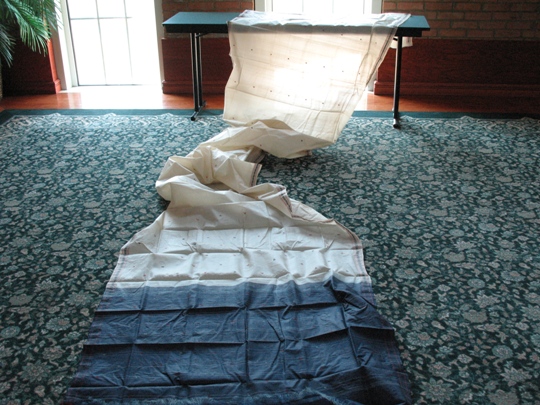 Folding a sari is kind of like folding a map… a map five and a half yards long. It’s carefully folded so that none of the inside parts will show, or snag on things. I didn’t manage to fold it back perfectly, but I got most of it right.

This is a Kosa colored sari (that is: the majority of it is natural, undyed) and the pallau is dyed black. The pallau is the hangy-downy part that shows most when the sari is worn. It has what is called a resham border, which is a supplemental warp pickup, in a pattern of black flowers and red chevron stripes. I’m not sure if that part is Kosa silk, or if it’s mulberry silk – it looks a little finer, and is a distinctly different yarn. The sari is covered throughout with small brocaded patterns called bhutis, or buties. Bhutis are always said to give a sari elegance and charm. This was woven in Raigarh, in the state of Chhattisgarh, India. 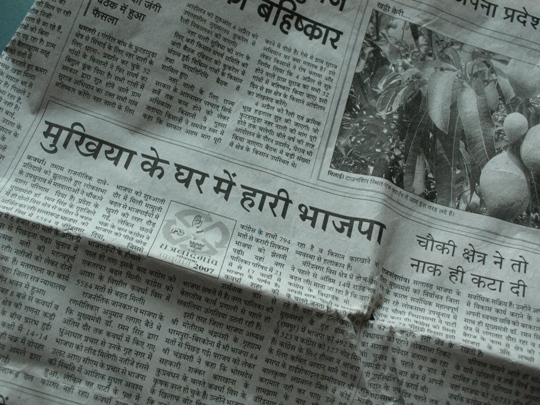 This newspaper was folded into one of the inside folds, to give it a little extra body. It’s in Devanagari, y’all. I have no clue which of the many languages it is in, but it’s probably Chhattisgarhi.

The bhutis are woven in discontinuous weft brocading. For each bhuti in a line across the sari, the weaver will use a separate small shuttle or bobbin of silk. For simple bhutis like this, it might even just be a small bundle of yarn. 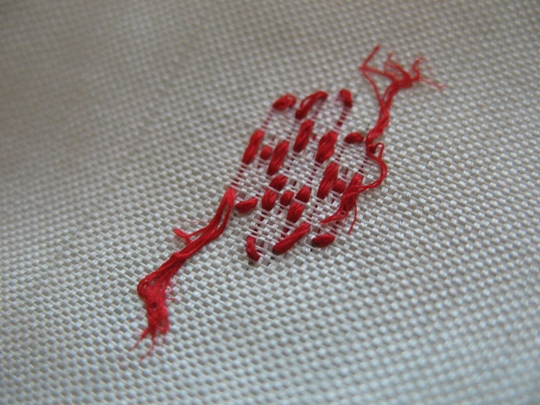 Here’s the back. You can see where they just leave the ends hanging. The weave is tight enough that they don’t seem in danger of pulling loose. I’m not entirely sure if the bhutis are made using the same silk as the border, or if it’s different – it looks like the same dye colors, but the texture and twist are a little different. My guess is, that it’s the same yarn, and it is manipulated during the brocade to take out some of the twist. 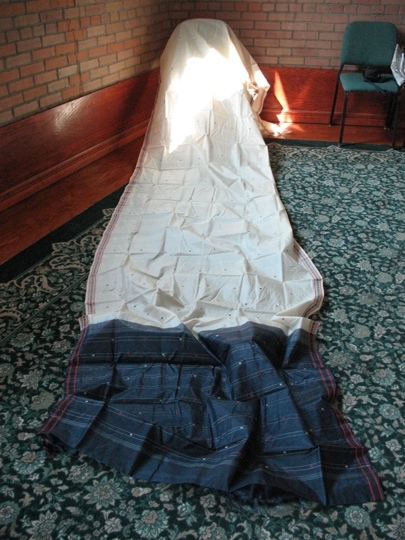 Did I mention that this is a LOT of silk? I’m honestly not sure what governs the lengths of saris, but I’m betting that it’s some traditional length for each region, and the yardage measure is a recent overlay on some pre-British measurement. 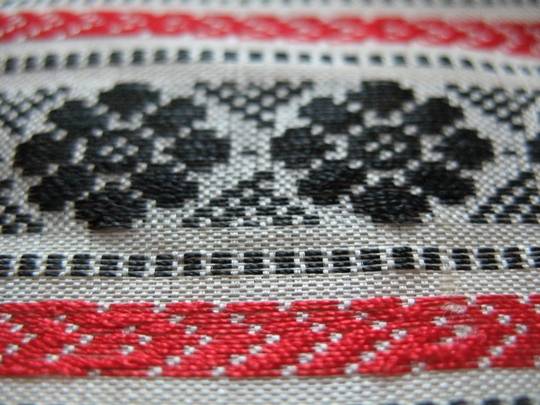 The resham border. You can see the occasional skipped thread, where a shed didn’t entirely clear. 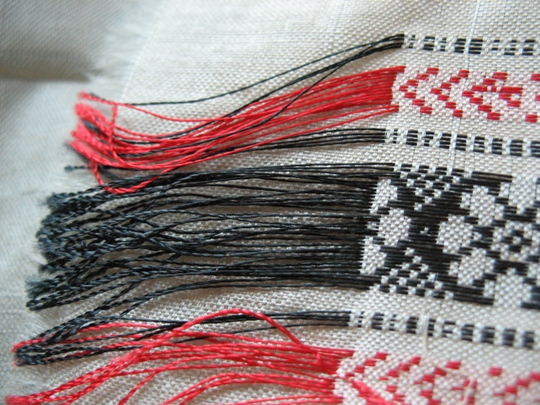 The border pattern ends about an inch and a half shy of the end of the sari, and the rest is plain weave. The ends aren’t fringed, knotted, tied up, hemmed, or anything. 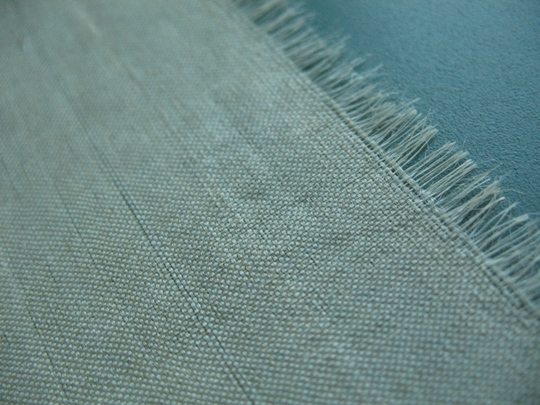 Here’s the edge; it’s trimmed cleanly, but not treated in any way. I’m pretty sure from looking at it under a high-powered lens, that this stuff is totally untwisted reeled filament in both warp and weft. 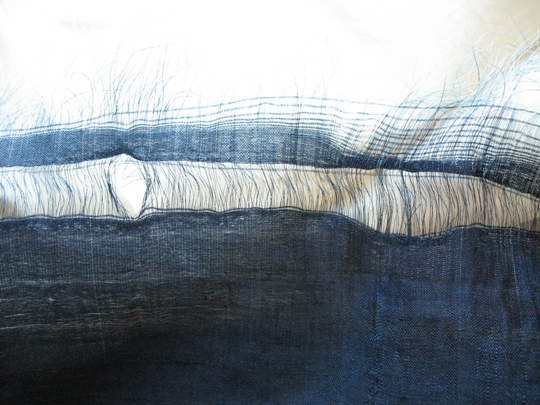 On the pallau end, there is a gap, and then a small woven border. This probably has to do with the way it drapes; the open gap makes it softer. 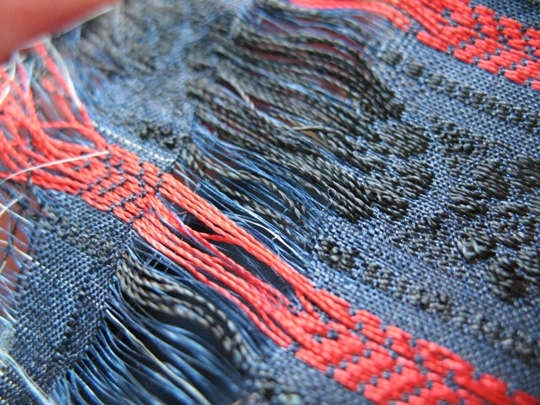 This is the end of the border on the pallau side. The border continues across the gap on this end. You can see the texture of the resham work threads very clearly here; it’s a two-ply shiny silk.

The silk is quite fine; you can see the light coming through it. 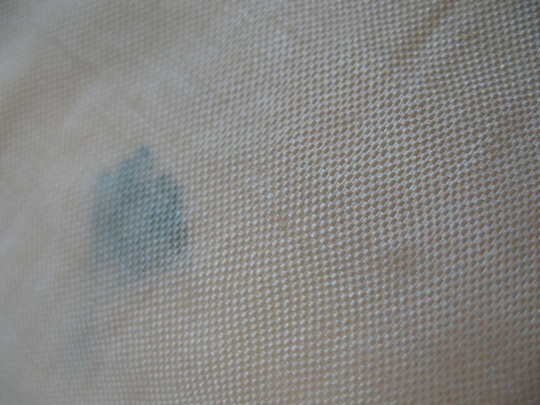 And you can see the bhutis on the layer beneath.

The photos just can’t show the texture of this stuff… you don’t get it until you see and feel it move. So, this is a little video of me crinkling the silk. It has a texture unlike any other fabric. It almost reminds me of a very fine starched cotton, or thin paper, like tissue. It’s stiff, but not at all rough. If you’ve handled a silk dress that has tissue paper stuffed inside it – it’s kind of like that.

I got an amazing deal on this – the cost of the sari was 1299 rupees (about $30) and it cost 1100 rupees (about $26) to ship it. So less than sixty dollars, total, delivered by DHL to my office. The vendor was wonderful about answering my weird questions. If you want to buy one, email me at wormspit@gmail.com and I’ll hook you up with the vendor.

Why Peace Silk Pisses Me Off Heminway thread
Scroll to top