My “To Keep Them Sweet” ribbon won the Complex Weavers Award at the Dallas Handweavers and Spinners Guild Show! I’m very jazzed about it.

I’ll post photos from the show, once I’ve had time to sit and resize them and fiddle with them.

Behind the cut, is information about the piece and the show, so I’ll have it in one place.

Name of show/exhibit: “Turn, Turn, Turn: A Time to Spin, A Time to Weave” – biennial juried show of the Dallas Handweavers and Spinners Guild

Date of show/exhibit: Opened April 10, on display through May 25

Title of Winning Entry: “To Keep Them Sweet”

Image of the full piece: 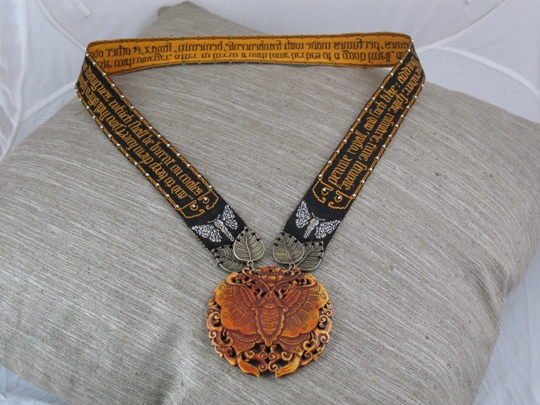 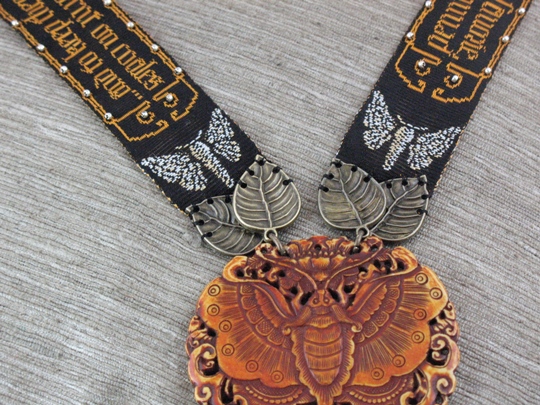 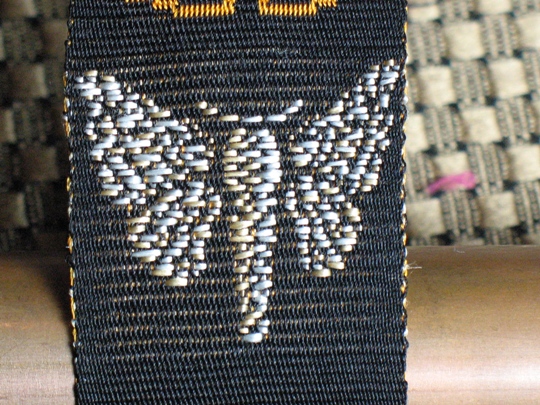 Origin of draft: Entirely original. Because of the technique, this piece has a very simple threading, all tablets being threaded with 2 black and 2 golden threads; all the work is done following detailed
charts which I designed. I created the lettering based on 14th century Textura Quadrata, and I designed the brocade pattern for the moth after an illustration in Luther Hooper’s “Silk, Its Production
and Manufacture.”

Small version of the graphs:

Large version of the graphs:
http://www.wormspit.com/images/Ribbons/andtokeep_ribbon3.jpg
I actually use a modified version for weaving, where the ground is white and the pattern is colored.
The red lines are just “scaffolding,” they relate the pattern to specially marked tablets that help me keep count.

Threads used, sett, weave structure, epi, etc.: The ribbon is approximately 28″ long, made with 73 four-hole tablets. Warp and ground weft is #50 weight silk filament sewing thread in black and
gold (I dyed the gold, but the black was purchased already dyed) with my own hand-reeled-from-cocoons filament tram for the brocade weft, dyed in two shades of ecru. It’s just over an inch and an eighth
wide, which puts the EPI at about 260 (although this is deceptive because of the layering). Picks per inch is around 54. The lettering is done using a Double-Face design (the back is the reverse
of the front) and the moths are done in surface brocading using a separate shuttle for each of the two colors.

Please describe the piece, technique, inspiration, unusual features, special equipment (if any) and other comments you would like to share:

This ribbon celebrates the humble silk worm and the amusing lengths that seventeenth-century Englishmen went to to raise them. The ribbon is figured with text along its length, and at either end where it adjoins the medallion, decorated with a brocade image of a Bombyx silk moth. The ribbon is decorated with glass beads, and the ends are joined to bronze cast leaves and attached with jump rings to the
medallion.

At the working size, this pattern needed fifteen pages of chart for the lettering, plus the page of the moth on either end. The gold-plated glass beads were strung on the foundation weft, and pushed forward as needed.

The quote is from a 1607 book by Nicholas Geffe, called “The Perfect Vse of Silk-Wormes, And Their Benefit” – this is a document on how to raise silkworms, from a period when King James was attempting to
encourage domestic silk industry in England as well as in the Colonies. I pulled an excerpt from a longer sentence. PDF of the Geffe book here.

These are images (cut from the PDF) of the passage:

This is what the text of the ribbon says: “…and to keepe them sweet you shal often sprinckle the floore with vineger, after to strew it with some herbes of a good smell, as with lauendar, spike, rosmarie, time, sauorie, pennie royall, and such like: adding some times, perfumes, made with frankencense, beniemin, storax, & other odoriferous drouges, which shall be burnt on coales”. Spellings follow the original, including two spellings of “shall” in the single sentence! Yes, I missed the “e” on the end of “keepe” – it happened very early on, when I was transcribing from the original images of the book, and so every version that I checked my spelling against, it was “keep.” It’s just a mistake, and I didn’t catch it until very late, and there’s no “Weave Out.” Many of the terms are archaic, such as “beniemin” – Gum Benjamin, which is now called Gum Benzoin, is a tree resin with a vanilla-like aromatic scent.

There was, you see, this storm… The Guild Show
Scroll to top