Blog - Latest News
You are here: Home / BLOG / Uncategorized / Love and Moth Dust are In the Air!

And lots and lots of pheromones.

My partner Chris made me some silkworm trays; I looked at them and realized they might be *just* the thing for hanging the female moths in the yard to attract males. Last night was a perfect night for moth romance – it rained early in the evening, so it was cool and nice, and there was a light gentle breeze, and a little over half moon. I had three female moths which had hatched a day earlier, but hadn’t gotten any suitors the night before – so they were, well, REALLY in the mood. 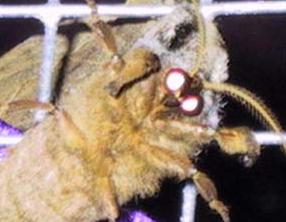 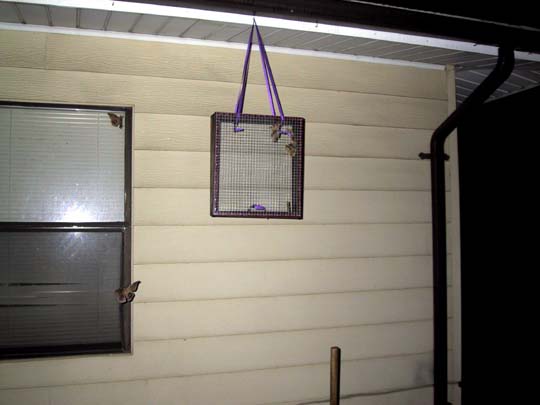 I was awakened by a loud crash. I figured that the cats might have knocked something off a counter. It turns out that the noise was outside; one of the cats had tipped over the ladder, which was leaning against the wall near the moth cage.

You can see the cage, hanging from a hook on the eaves of the house. The sides are made of painted MDF, and the faces are half-inch hardware cloth. This is a perfect combination, because the fiber board is too slick for the moths to grip, so they hang on to the sides – where the males can reach them. The hardware cloth is too small for the moths to fit through, but they can breed through the mesh. I hinged the trays together with polyester ribbon; it opens up like a briefcase. In front of the window, you can see two of the males that have flown in to get a piece of the action. Overall, I counted at least seven – there may have been more. It’s difficult to count them in the dark, because they fly in these great swooping arcs. There were so many, there was a light drizzle of moth dust in my flashlight beam. 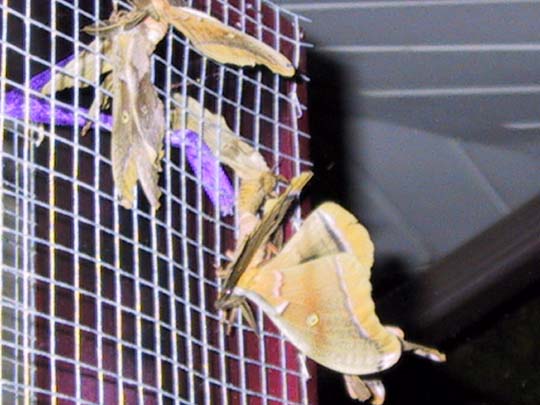 Of the three moths, two were already mated by the time the crash occurred at 5:15. One of the females is really small, and her body was pulled completely through the hardware cloth, leaving her dangling. The entire weight of the male moth is suspended by her powerful grip. I’ll bet he’s going to be sore tomorrow. You may notice that the female up at the top of the frame has two boyfriends. Only one of them can actually make the bond, but the other one is giving it the old college try. Every once in a while, he’ll flap and wriggle, maybe to see if he can dislodge the other guy and get his genes passed on. 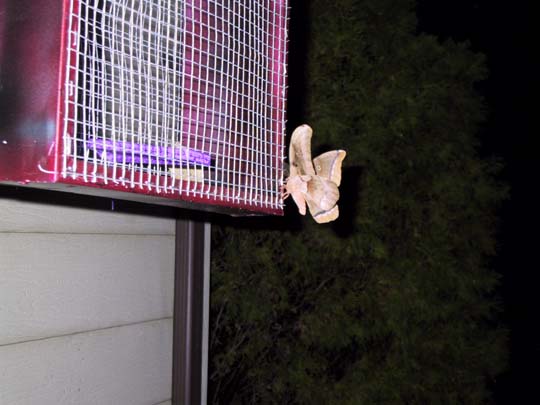 There’s one more unmated female. She’s in the bottom of the cage, but on the back side. I think possibly because it’s close to the wall (it’s got a foot or more of clearance, but not a long flight path) the males are a little confused. 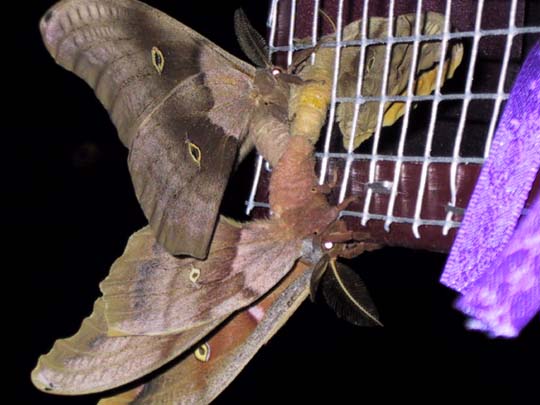 Eventually, somebody figures it out. And once the puzzle is solved, it’s just crazy. Each girl had two boys. Some of the boys, driven out of their little minds by pheremones, tried to mate with anything even vaguely moth-shaped, including fallen leaves and one another. 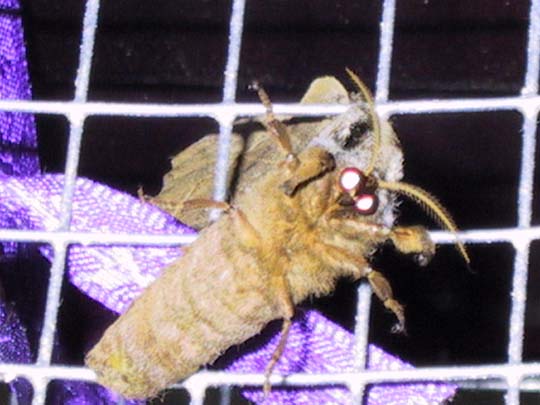 This is the same female that got pulled bodily through the mesh – she just hung there, pinned by her wings. After much tussling, the boys arguing over her finally managed to knock one another off. You can see from the red gleam in her eyes, that she’s not really happy with the situation. Fortunately for me, moth mating is really over-driven, and even just a couple of minutes usually does the trick. The other 18 hours or so is just afterglow.