I took a lace-knitting class at CHT, and found out that it’s not as impossible as I had heretofore believed. We did Old Shale as a learning experience, which didn’t turn me on so much… but it paved the way.

So Susan Lawrence’s Branching Out on Knitty was just the right thing at the right time. Hard enough to make me really learn what I’m doing, easy enough that I didn’t throw it against the wall in despair more than twice, at least after I learned how to set life lines.

I have a bunch of nice fingering-weight alpaca (200 yards / 50 grams) yarn from an Ebay auction that I decided would be nice – it turned out to be a good choice, as it tinked relatively easily and stood up to the constant fiddling that I had to do while learning the pattern. It’s not as soft as I wish it were; it’s got an odd blend of very-soft and slightly-scratchy touch. 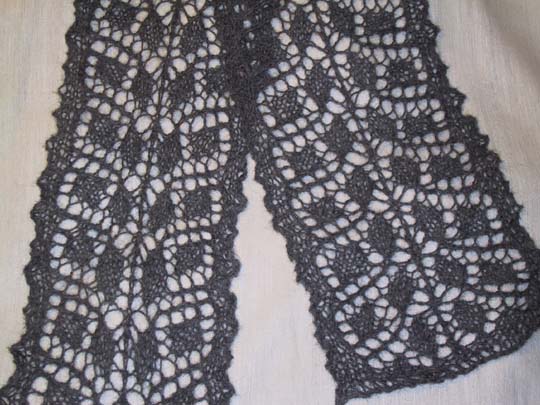 Here’s the finished scarf, mostly laid out. It’s a long rectangle, so it’s tough to take an attractive photo of the whole thing in a single shot. 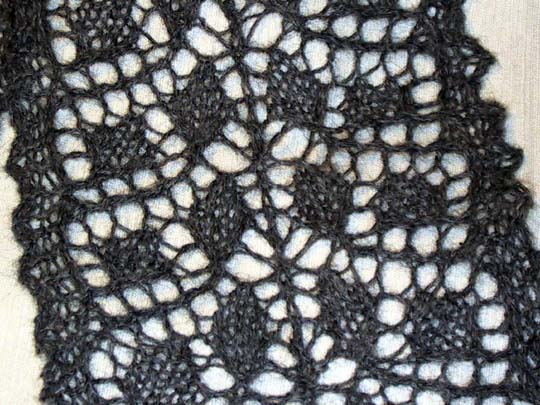 Here’s a closeup. The alpaca does fuzz out some, but not so much that it obscures the stitching. I used slightly smaller needles than called for in the pattern (6, instead of 8) because the 8’s were giving me a too-holey fabric in a blocked swatch. I like the way it turned out, spacing-wise. 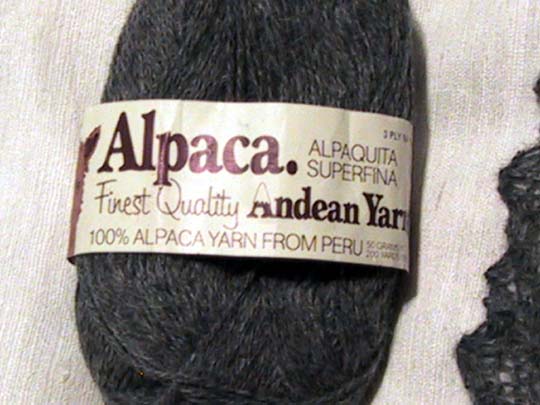 This is the yarn I used. It’s not amazing quality alpaca; I want to do this again with hand-spun alpaca, because I’ve got some good quality stuff, and it’s a lot softer.

The pictures of alpacas printed on the ball band look like they have waaaaay too much makeup on. They look like alpaca hookers. “Hey, big boy… you’re a big hot camelid STUD… whose daddy are YOU?” 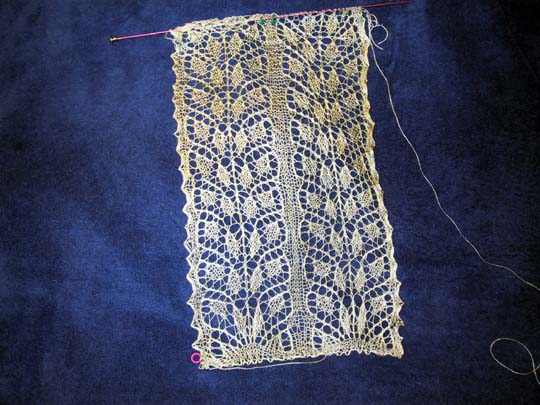 In order to get it to work out wide enough in the silk yarn I wanted to use, I made it two repeats across, with a garter bar between. I like the effect, although I’m not sure if the center bar ought to have some occasional patterning, in a design sense. This is worked in 35d10x2 Tussah organzine from Habu – it’s a reeled Tussah thread about the weight of #10 crochet cotton. It’s on #1 needles. Yes, I blocked it while it’s on the needles, to check how it was going to come out. I have this feeling that it’s against the rules, and I felt naughty while doing it, but it doesn’t seem to have damaged the fabric at all. The needles are aluminum; I would hesitate to try that with wood or steel. The silk responds *beautifully* to blocking. 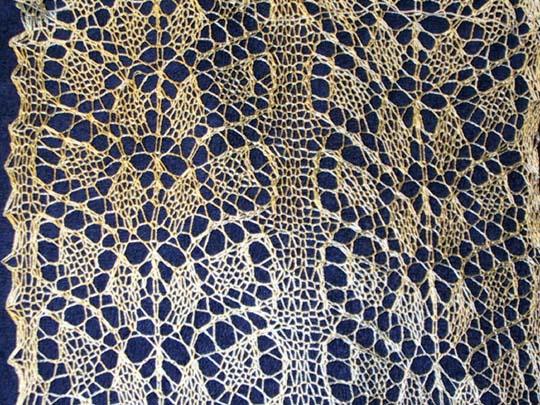 You can see the color in this one, a little. The silk sheens in the light, so you only see the real color in a part that is turning away from you. I’m not sure whether this will end up dyed a solid green, or left natural tussah color, which is a pretty ecru. 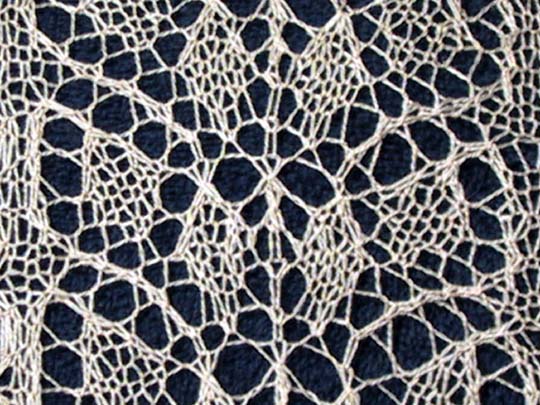 A close-up, where you can see that my tension isn’t as even as it ought to be. 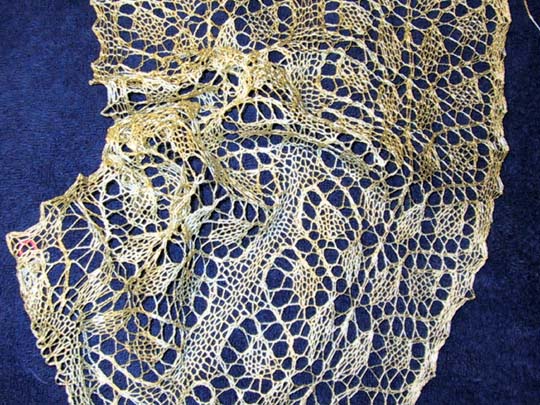 Here, I tried to crumple it a little, to show the sheen of the silk. What it looks like instead, is that the cat yakked on one side. But, if you look at it and kinda squint, and tell yourself “This isn’t cat-barf on the scarf, it’s the luxurious sheen of the reeled silk,” you kinda get it.