I’ve never had an organic garden before.  I grew up in a house on an acre lot, and there was lots of nature going on… but the garden and the flowers were always sprayed with strong chemicals, and so there wasn’t much in the way of garden insect life.  Here on the creek, and in a woody, rambling part of Dallas, we’ve got an amazing ecosystem.  I have thoroughly enjoyed seeing a lot of the critters!   I encourage some and discourage others, aiming for a balance  heavy on the beneficial-insect side that gives me more vegetables and flowers, fewer holes and spoiled fruits.  So far, I’m using Bacillus Thuringensis (BT), Spinosad, and insecticidal soap, plus hand-picking.  I’ve done my best to use only OMRI-compliant choices. 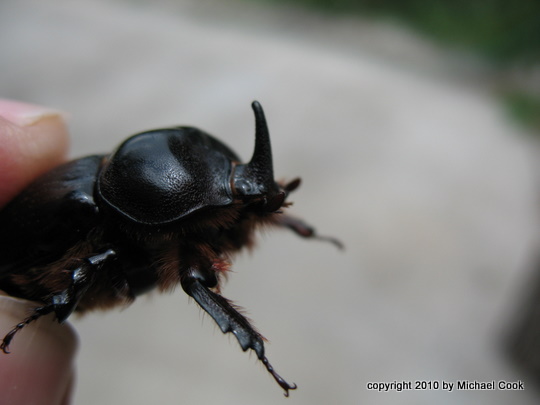 I think these giant rhinoceros beetles are very cool.  They get to live, because they eat decaying forest-floor matter.  The chickens tried for a while to eat one, but eventually decided it was just a moving rock. 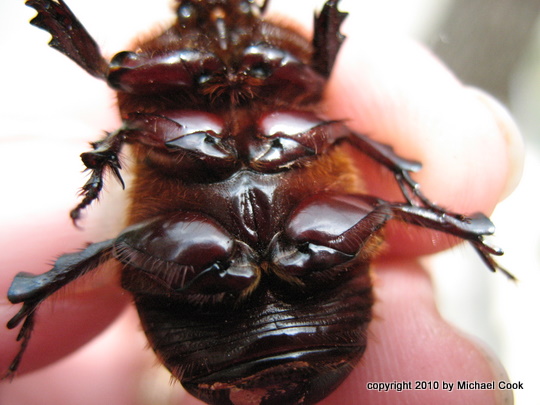 They’re nearly as well-armored below as they are above. 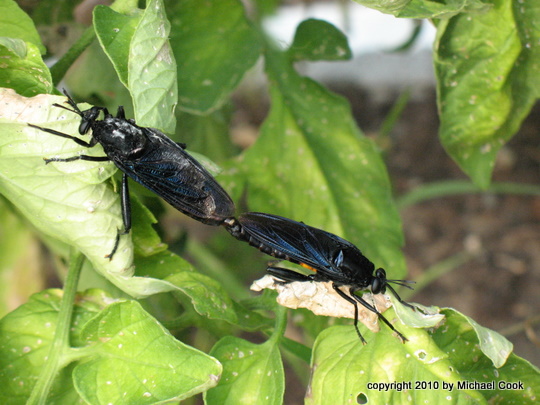 Apparently pretending to be a bee or wasp is a good way to make a living.  These are Mydas flies. 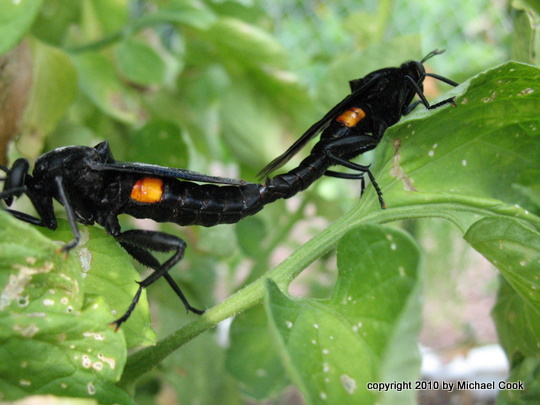 I have to admit, I gave them a wide berth the first time I saw them.  They do this thing where they arch their abdomens, pretending to sting the ground; it’s intimidating.  The fact that they’re about an inch and a half long doesn’t hurt.  There is considerable debate about what they eat – they’re not well studied.  Current understanding seems to be that they mostly dine on pollen.  I always welcome additional pollinators in the garden. 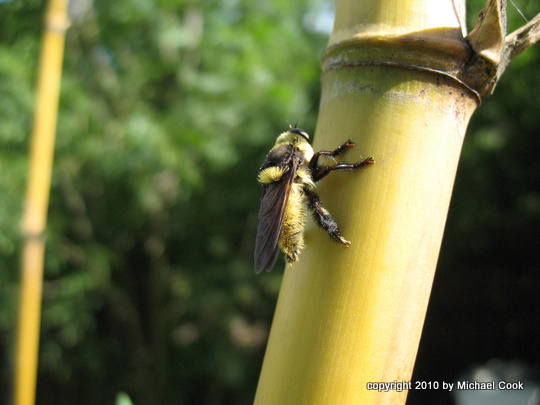 Also not a bee.  This is some kind of fly, but I’m not sure exactly which species.  I think it’s one of the “Bee-like Robber Flies.” They do a very good job with their mimicry.  They and their larvae are typically insect-eaters, which means they’re my friends! 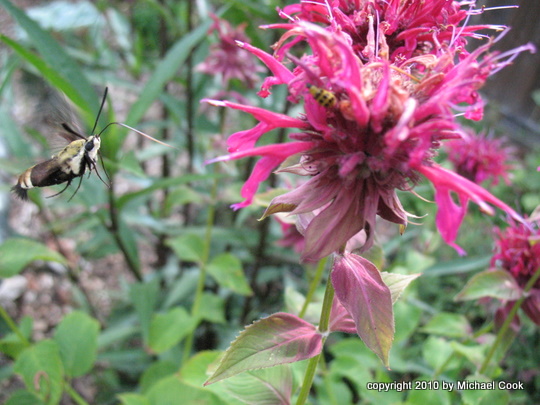 A Snowberry Clearwing moth; these look a lot more like bumblebees when they don’t have their proboscis out!  The Bee Balm has been a popular treat for bees, butterflies, and hummingbirds.  I will definitely plant more. 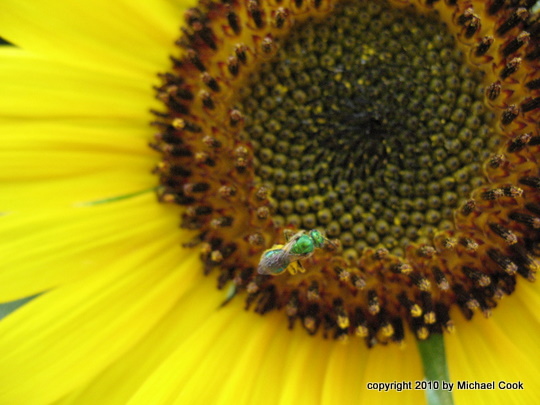 Finally, an actual bee.  I haven’t kept count, but I’ve seen probably ten or more species of bees in the garden, from mason bees to carpenter bees, bumble bees to these tiny emerald sweat bees.  We are definitely not lacking for pollination. 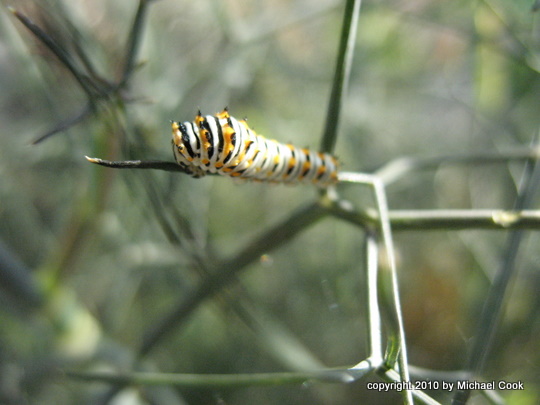 Ok, this is one of the things where I’m a little torn.  We’ve had lots and lots of butterflies in the garden, and some really beautiful ones at that.  Monarchs, swallowtails, Gulf Fritillaries… and I am raising several host plants, on which they lay their eggs.  More butterfly means less plant, of course, but it’s worth it for some of the nicer butterflies that don’t eat my food crops.  Within reason, I want these caterpillars to live. 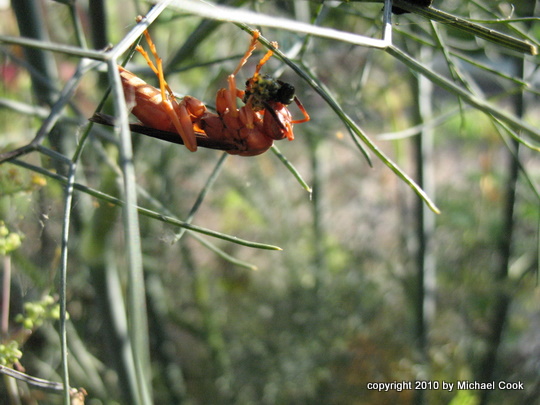 However, we have a really thorough crew of red and brown paper wasps.  They wait until the caterpillars are close to an inch long, and then they scour the plants, eating them all.  I kind of wish they wouldn’t… but at the same time, I have had zero hornworms on my tomatoes, so the wasps are definitely my friends.  I just wish they could get down into the plants and eat the damned cabbage white caterpillars that made some of the bok choi into lace.

I grew up with wasps that *look* just like these in Houston, where we most often saw them munching on daylily stems to make paper for their nests.  They were mean as hornets; I got stung often, and with essentially no provocation.  I knew how to be careful – and I almost never got stung by bees or other wasps, but these red ones were just bastards.  I literally had them fly up to me as I was standing in the yard, and sting me.  Here, they’re sweet-tempered and have never offered any offense.  I don’t know what makes the difference.  Also in Houston, the nests were under the eaves of almost every house; here, I haven’t seen a single nest.  I’m betting they’re high up in the trees, but I don’t know why they have the difference of habit.  It’s a delightful surprise to have wasps that are such effective predators, while also being such good neighbors. 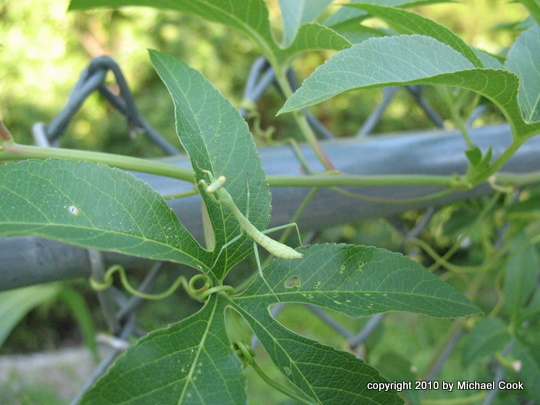 Mantises, of course, are one of the coolest insects there are, and every gardener’s friend.  I hope we get lots of eggs this fall.  I’ve seen probably half a dozen or more in various parts of the yard. 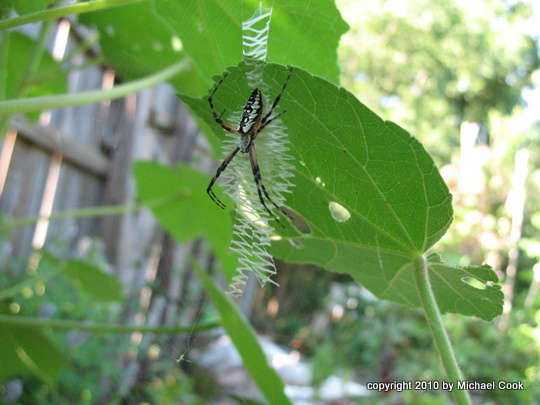 Charlotte says, “MWWAAAMMNVVVHAAKMMNK”.  These Argiope spiders have always been one of my favorites, and I feel specially fortunate to have one in the garden.  I had to move her from the tomato plants, so she wouldn’t get hit with the Spinosad; now, she’s taken up residence in the Confederate Rose hibiscus.  I plan to start feeding her spent silkomths, so she can yolk up and get huge like the last big one we had on the porch in Farmers Branch.