I am raising a Thai strain of silkworms.  This spring, I had one good-sized group, and they all made moderately sized cocoons – except for one, which turned out tiny.  The summer group, I will admit, got a little bit neglected; I moved during the middle of their cycle, and  so they sometimes got not enough food, or old leaves because I couldn’t find the new ones near my new house… you get the idea.  Poor little red-headed step-child worms.

So – some of them decided that life was tough, and they would cocoon early.  They spun up in the fourth instar, making TINY but perfectly-shaped cocoons.  My friend Eika explained that these are called trimoulters, and they are typically caused by feeding over-matured leaves. 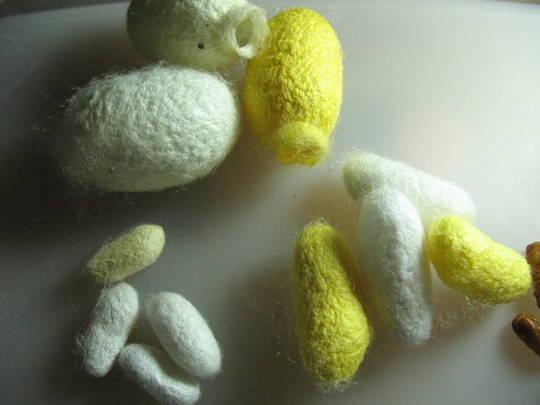 Now – these are a naturally small strain.  Chihuahua puppies are never going to grow up to be German shepherds – but the trimoulters are *freakishly* small.  Here’s a comparison of normal Thai cocoons, hybrid Chinese cocoons, and the trimoulters. 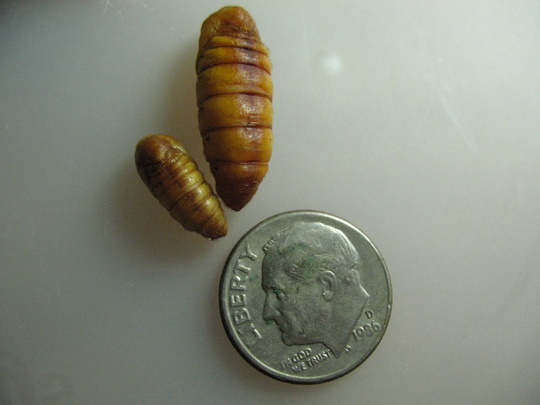 and here’s a comparison of the normal (smallish) Thai pupa, and the trimoulter pupa

And, in a move that should surprise no-one, they hatch out as freakishly small moths.  They’re SO CUTE.  Like pinchums-widdle-cheekses cute. 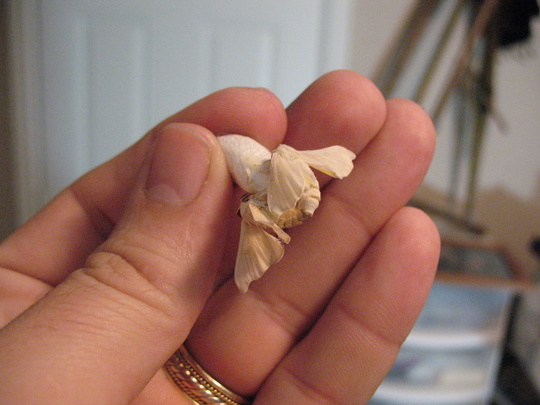 Despite being tiny, they are breeding vigorously.  I’m curious to see what will come of it – and whether the eggs will be visible.

Things are not always what they seem in this place…
Voltinism
Something we don't often get, here!
Fiddlebacks
SpinOff’s 2010 Calendar
At the Crow again - but this time, at NIGHT!
Easter Egg Cocoons
Because the bug IS the feature…
0 replies

Fiddlebacks Hey-lolly-golly, get it any way you can!
Scroll to top