I’ve had embroidery on the brain for a while now. I’ve been doing more thinking than stitching up to this point, and I’ve finally made some silk I’m happy with so I’ve started work on a project.

This is a sample for me to get my hand around working with the silk; by about the third petal, the silk was finally starting to talk to me and tell me how to work with it. I’ve looked at videos, read books – but I find with any tactile technique, having the actual stuff in my hands is the best teacher. This is about half the weight of the embroidery silk I had made previously; it’s four (instead of 8) of my forty-denier (or so) filaments, with a light twist that I can then work back out during the stitching. Dyes are Jacquard acids. 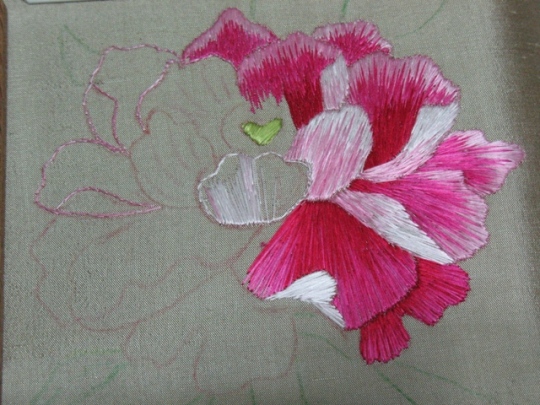 The peony underway. I started by drawing the peony freehand onto the silk, based on a piece embroidered by Young Yang Chung (photo taken from her book, below) and then stitching the outlines and starting to fill with long and short stitch. The main thing that took me a while, was figuring out that I could make LONG stitches… some of them an inch or more – to get the look I want. I’ve been looking at photos and actual pieces of Chinese and Korean embroidery, which is the look I’m after; they take some surprisingly long stitches, which brings a lot of sheen to the surface as the light reflects off the long silk. 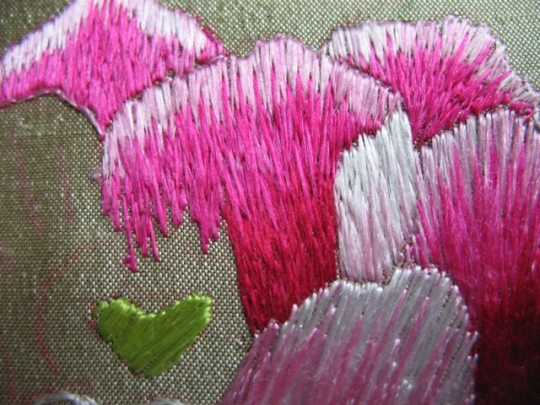 The top two petals are before I had figured out how long the stitches wanted to be. The stitches are very short, and not nearly as satiny as the longer ones. It doesn’t look bad, but it looks… belabored. I went back in and “fixed” a couple of the petals, but the one on the top left, I haven’t. It mostly makes a difference in the optical blending of the colors. 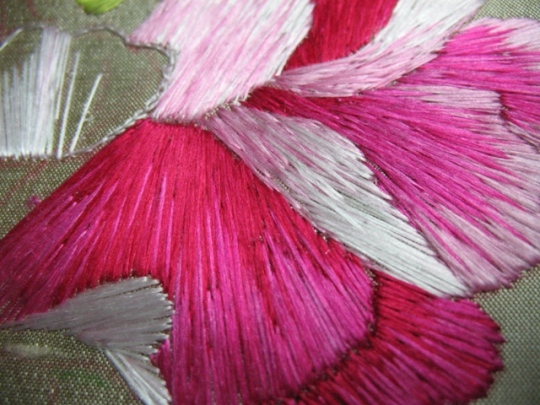 THIS is what I want. It shimmers when you move it, the light reflects off the silk almost like it’s made of metal.

This is the model I based it on; it’s a photo from an illustration in a book (Yang Young Chang’s “Painting with a Needle”), which is a photo of an embroidered piece. So it’s a couple of generations removed (and I can’t sit and look at where the stitches go!) but it gives me the right places for the shades, and at least a sense of the angles. I want to figure out how to adapt photos of real flowers to do this; I did some experimentation with this a while back, and want to incorporate a more satiny long-stitch technique with that kind of realistic design.