This is a project that I’ve been fiddling with for quite a while. I finally got it finished up, blocked, pressed, and gifted the week before Christmas. The photos have been hanging out in the camera since then – finally, all the *other* holiday business is done, so I got a chance to fiddle with them.

I got to experiment with pressing silk lace with a steam iron – and I definitely like the effect!

This pattern is an adaptation of Susan Lawrence’s Branching Out. I had made a version using alpaca yarn that was much closer to the original guage; that was my first lace project. I decided that I wanted to make one in all silk, but with the much smaller yarn, I found that I needed to work on size one needles, so I doubled the pattern to make the scarf wide enough. I put a 3-stitch garter bar in between the two repetitions. 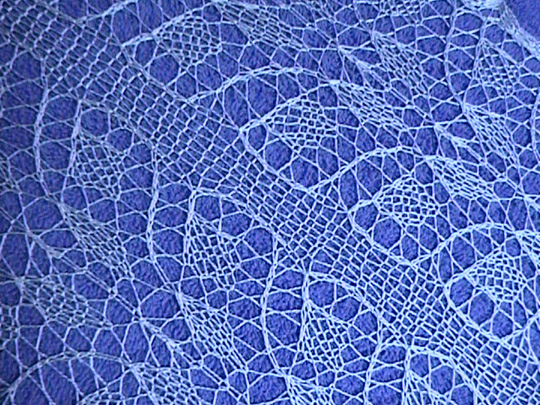 The yarn is a Tussah organzine from Habu Textiles – I think it’s the 35d12x2, but I can’t find the cone label to be sure of that. A nice shiny cream-colored yarn, about the weight of buttonhole thread, but not as tightly twisted.

It blocked out *beautifully*. The main problem I had was that there was no established standard for how big it ought to be – I found that the lace was very flexible, and could range from four to ten inches across, with corresponding differences in width. I eventually had to just pick a width of about seven inches and go for it. It’s a little shorter than I would have made it, but it hangs exactly like Mom wants it to, so that’s what matters.

I had read in Yarn Harlot’s blog, and a couple of other sources, about ironing silk yarn. I decided to give it a try. The results were excellent! 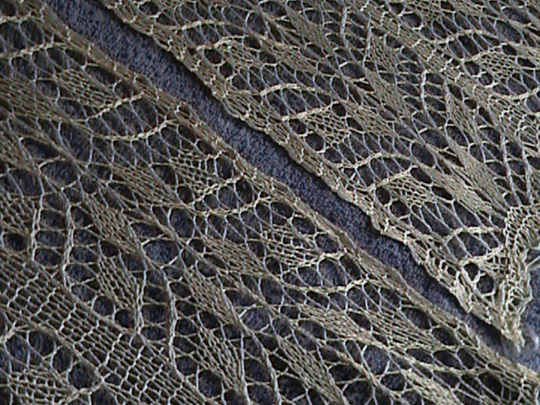 This shows one end of the blocked, but not ironed, scarf (below) alongside the ironed end (above, right) – you can’t really see the difference in this photo, but it makes the yarn much flatter, and improves the drape. It also looks like it will keep the lace in its shape better – the yarns are more difficult to pull out of pattern. 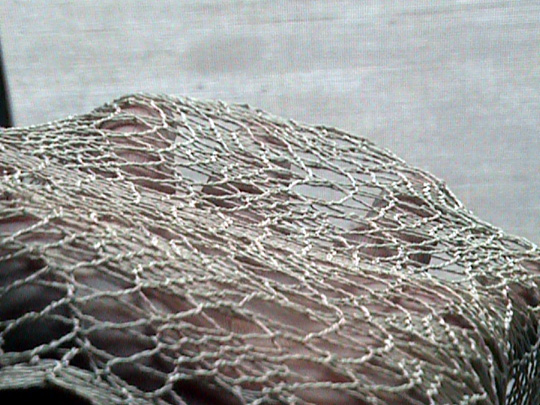 This is the un-ironed end. You can see that the silk catches the light, but it’s across the curvature of each bit of the yarn.

Here, the ironed end. Because the yarn is flattened out, the light catches more on the surface of the scarf, making the whole thing appear more shiny.