Blog - Latest News
You are here: Home / BLOG / Uncategorized / When Ya Gotta Go…

Monday, I was working on cleaning out the chicken coop.  Rawnell decided that she needed to lay an egg.  In spite of the whole top of the coop being open, she walked up the plank and plopped herself on the nest.  I respectfully left her alone; a girl needs some privacy for these things. 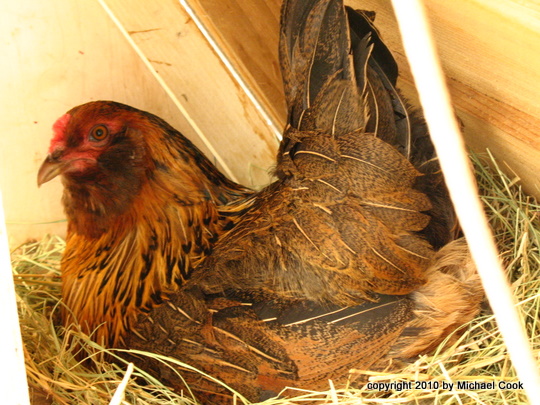 Apparently it was a false alarm, though – after a few minutes, I went back outside, and she was out pecking with the other chickens.  I got back to the business of shoveling chicken poo.

I got the coop cleaned out – the linoleum flooring makes it easy!  An area on one side was a little wet, and needed to air-dry, but Rawnell decided it was egg time again.

She walked around cackling. Usually, hens make this noise after they’ve laid an egg, but you also get it sometimes if they’re distressed or annoyed.

The nest box doesn’t look right with no hay in it. She walked up the ramp, around the top of the coop, and back down, several times. “Where’s the nest with the hay in it? I swear I left it here just a minute ago…”

She tried looking at it from a different angle. This didn’t work.

I put the hay and the shavings back in, and she settled down in a nest box on the opposite end from the usual one. Of course, with seven hens, they ALL decide that they have to use a single box. It makes for convenient egg-collecting, but sometimes causes a bit of a traffic jam.

She sat (and I left her alone) for probably ten minutes, before she decided that box just wasn’t going to work. She was agitated and fidgety, and finally got up and crossed the coop to the usual box. She fussed and fluffed and rearranged. I gave up on putting the coop back together, and went inside.

After folding a load of laundry and coming back out, I found one perfect, beautiful blue egg.

My Very Tiny Singles: Let Me Show You Them. Witch Egg
Scroll to top