I’ve been getting mulch, bucket by bucket, from a wonderful tree company, Preservation Tree Service.  I haven’t hauled any for a while, because it’s just been too hot, but when I was spreading out the sheet mulch early this spring, I was going multiple times per week, sometimes even multiple trips per day.  I probably carried 180 or 200 of the little tubs.  As we discovered, though, mulch compacts fairly quickly, and, through the wonder of decompostion, it becomes part of the soil.  So it seems like we have half the mulch now that we did then.
I had talked to their supervisor, back in May, and he said that as long as I didn’t mind mulch with the occasional log in it, they might be able to dump some at my house, if they were doing a job in the area.  I waited, and hoped, and hoped… and nothing happened.  I figured they’d lost my number, no big deal, I’ll get more once it cools off.  And then Supervisor G calls me this morning – they are clearing some land of cedar trees, it’s 100% cedar mulch, they will have 8 to 12 loads over the course of the next three days.  He dumped one load, and said they wanted me to look at it and see if I wanted more.  I checked it out at lunch, and found this: 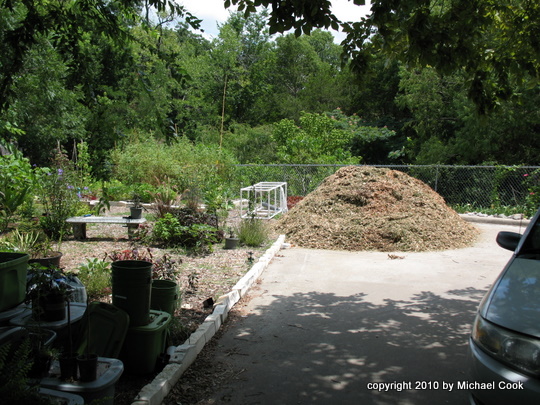 Just at a glance, I think it’s probably about as much in this one pile, as what I carried in my little Saturn Ion this whole Spring. 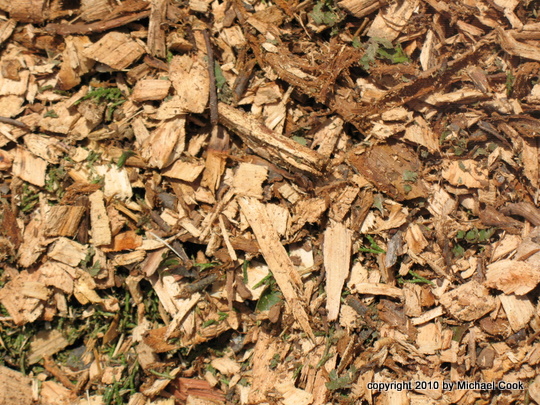 I asked for one more.  I’m going to see, tonight, how much of it I can get moved around the yard.  If the yard eats it up the way I think it will, I’ll ask for one or two more loads tomorrow. 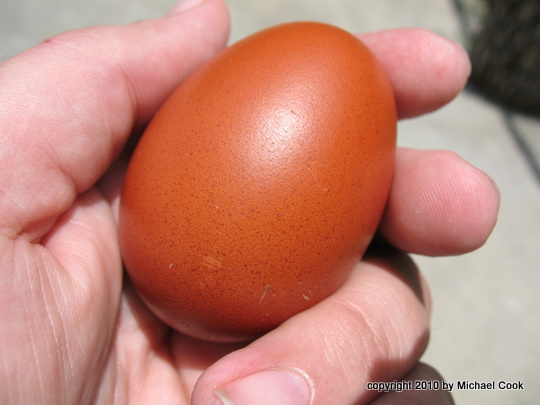 When we had to take back the three chickens who turned out to be roosters, we went up to Sanger and bought a couple of French Maran hens, one Black Copper and one Blue Copper.  We got two eggs when we brought them home, but then the stress of the move affected their laying, and we hadn’t gotten any since.  Today, there was a beautiful dark brown egg waiting in the hen house.  Yaaay, cool eggs!