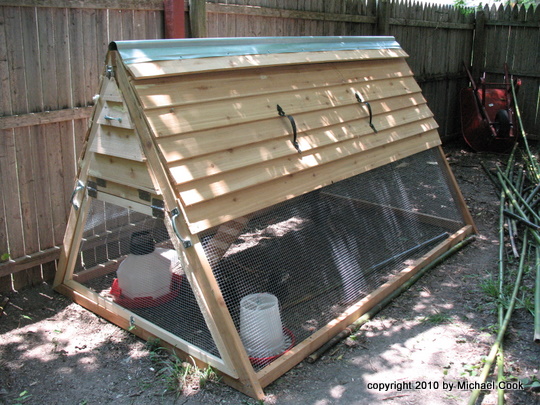 The coop in its new home in the side yard.

The chickens are doing well.  After a couple of days of not being able to figure out how to go up and down the plank, they’ve finally managed it, and they go back and forth easily.  Their voices are changing; they are starting to make clucking chicken noises instead of songbird tweets and chirps.  Their bodies are starting to develop into chicken-y shapes, but they’ve still got some chick fluff; they’re like awkward chicken teenagers.

Bees continue to do well.  A lot of the capped brood has been hatching, and they’re back-filling the emptied brood cells with honey.

The patterns of color in the pollen remind me of the old Lite-Brite.

I saw two queen cups, and the possible makings of a third and fourth.  They were all high up on the frame, not hanging from the bottoms – which makes me wonder if the hive is going to try superseding the queen.  I’m not sure how concerned to be about this; if anyone has advice, I’m keen to hear it.  Perhaps they’re just “insurance cups.”

Twice in the past week, there has been a busy cloud of buzzing bees outside the hive.  A lot of them seem to be trying to get in from beneath.  I checked very carefully, and they’re not getting in… they’re just trying to.  The hive has a screened bottom, so perhaps they’re smelling the hive and the honey and thinking they can get at it.  I’m thinking there might be robbing going on.

The entrance.  Notice how many bees are going *under* the hive, like they’ll find a back door.  When I removed the screen, I put the entrance reducer on in “small” mode, and had just last week opened it up to “medium” – I think they may not have been ready for that yet. I put it back to “small,” and haven’t noticed the problem since. 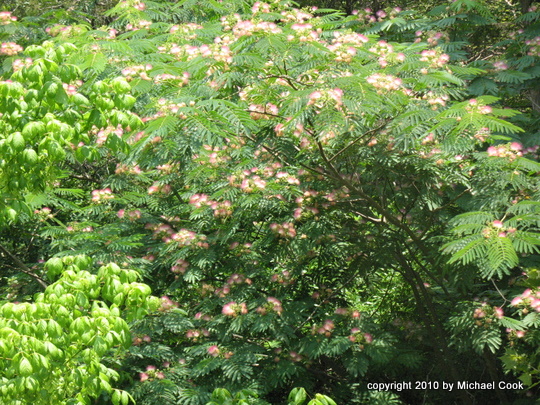 Mimosa is blooming across the creek, and it smells sweet in the afternoon sun.  I have fond memories of these from when I was growing up; there was a big one near my grandparents’ house.