I get occasional back-talk from people who think that “silk caterpillars” would be more accurate… typically they’re about twelve years old and learning about phylogeny, but sometimes they’re know-it-all forty-somethings.  Now, I have *real* worms; they live in a bin in the bathroom attached to my studio/office, and they eat our vegetable garbage. 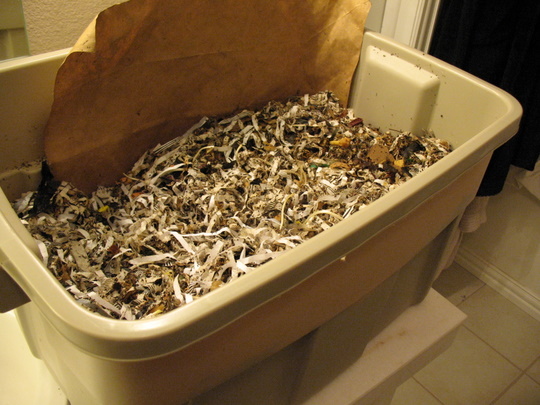 I got the starter worm bin from Vicki at Grand Prairie Worm Farm.  She was great, answered my myriad of tedious questions, and even delivered the bin.  There are lots of different DIY versions, as well as commercial versions, but this was local, and came with great support, and wasn’t very expensive.  It came to $44 with local delivery, and that’s not much more than what a pound of worms in the mail costs from most places.  These aren’t the worms you can dig up in the back yard – they’re a special composting worm, which doesn’t need deep earth tunnels to be happy like a nightcrawler does.

These are red wigglers or manure compost worms – Eisenia foetida.  Because they do well in a moist but not wet environment and can eat a variety of organic matter, they do great in a bin.  We feed them every couple of days – the cut-off ends of peppers and squashes, the peels of apples, jicama, avocado… you get the picture.  They don’t care much for onions or citrus, so those go to the outside compost.  The main charm of the worms, is that they produce a superior fertilizer from all this waste.  Called worm castings, a lot of gardeners swear they’re even better than manure for nourishing plants. They also chew through waste paper – they’re bedded down in a mix of shredded copier waste and junk mail. 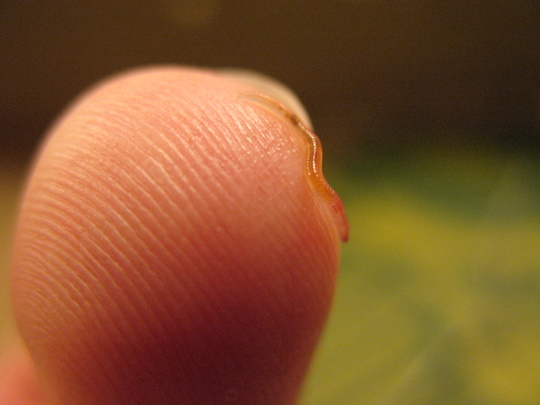 A few days ago, I started noticing TINY worms.   Some of them are as small as a quarter of an inch long, and narrower than a piece of sewing thread.

And tonight, I found cocoons – the presence of the baby worms means there have been cocoons for a while, I just hadn’t looked hard enough. 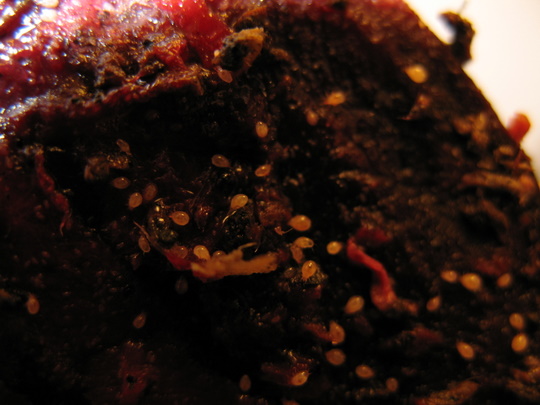 Many sources have said that other organisms will show up in the bin – and as long as they don’t stink, bite, or crawl out, they’re a good thing, as they help break down organic matter.  I’m not sure what these tiny things on this beet slice are (insect?  other arthropod?) but they’re cool.  They look like quarter-size aphids, but they’re a pale off-white.