Voltinism refers to the number of broods that a silkmoth strain (or species) will have per year.  Most of the silkworm strains in cultivation are univoltine (or monovoltine) – meaning they have one brood per year, and the eggs laid by the moths of that brood will go into diapause to hatch the next year.  Some strains are bivoltine, and have one generation that overwinters, and one that has non-diapausing eggs.

This strain from Thailand is multivoltine, meaning that it has multiple generations per year.  This makes sense in a region that has a very mild winter, and allows rearers to take advantage of the long growing season.  The first generation in spring lays eggs which hatch without diapause, and they continue to do so until the light cycle tells the worms that summer is drawing to a close, and then the moths will lay diapause eggs.  Some strains never diapause, like the Cambodians – but because of that, I wasn’t able to keep up with the strain.  I don’t have fresh mulberry in December.

The non-diapause eggs don’t mature the same way that diapause eggs do.  Instead of turning from pale yellow to brown and then gray, they stay pale yellow.  The only indication that they are fertile (and about to hatch!) is when you can see the head of the developing silkworm through the eggshell; it’s called “blue eye stage,” and it usually means you have a day or two before hatch time. 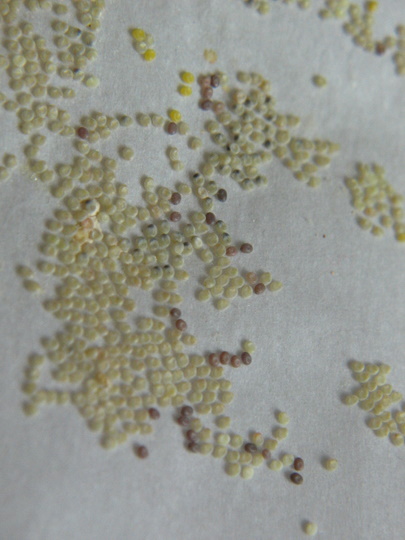 The diapause eggs are tan colored, and will shift to dark gray, indicating they’re developed and in diapause – at that point, they can be refrigerated for storage until spring.

At the Crow again - but this time, at NIGHT!
Upcoming event - The Culture of Cloth
Thread Counter
Twisting singles
Weaving on the Knotwork Necklace
More happy bobbins
And then you sit and ply…
Silkworm Paper
19 replies