I was contacted last September by a video producer in the exhibits department of the American Museum of Natural History. They’re working on an exhibit about the Silk Road, and they want some footage of silk being made, silkworms doing their thing, etc. She asked if I would be willing to help out – and, of course I would!

So now, coming soon to a prestigious world-class museum near you (if you live in New York…) – it’s me, and the silkworms, on a 48″ screen!

Mindy, the Director/Producer (one person, doing two jobs) flew in from New York, and Russell, the Light/Sound/Camera man (one person doing three jobs!) met up with her here. They came over last Sunday for a walk-through, and then we did the shooting all day Monday. Between staging, lighting, and shooting, it was a long day – we started at 7:30 in the morning, and wrapped a little after 4:00 PM.

We did three different setups – the first one was in my upstairs studio/office, with the various stages of silkworm growth.  Mindy (the Director) took these shots – and she was mostly busy figuring out what footage they needed, so we got pictures only when she had a slow spot.  The footage was all shot in 1080i HD, and even on the monitor looked GORGEOUS. I had arranged to have everything from eggs hatched that morning, to moths laying fresh eggs – I figured that way they can show the whole cycle.

Second setup was downstairs, for the reeling.  It’s always fun having your home turned into a video shoot – things get rearranged, clipped out of the way, lit, screened… 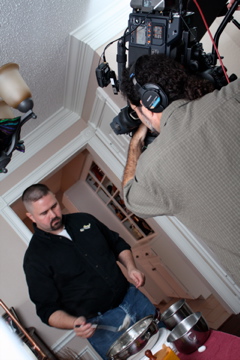 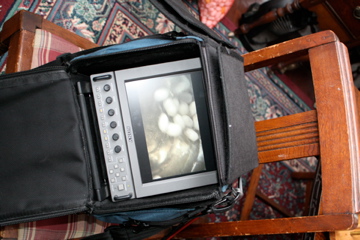 … and here’s what the camera sees. 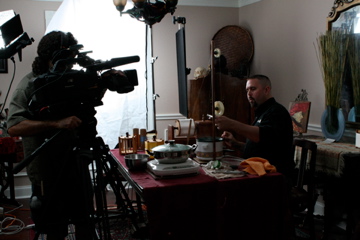 I was surprised at how dim some of the lighting was – they were aiming for “dramatic,” and apparently the HD cameras are *fast* and can capture very good detail in less light.

We did an interview at the end, so they could have “talking head” footage of me explaining things – and also material to mix into voice-overs of the caterpillars, etc.  I had to have some make-up, because I was shiny. 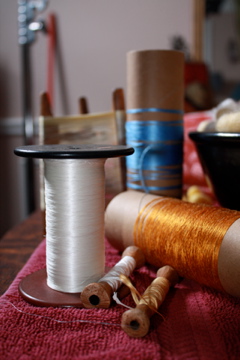 They did beauty shots of some of my work, which was cool to look at. It’s amazing, how the eye of the camera, whether still or video, can change the way you see something.

So: “Traveling the Silk Road” will open November 14 at the American Museum of Natural History in New York City.  I’m hoping that I can get there, one way or another, to see it!

And special thanks to Chris, who took the day off and wrangled the dogs.  I couldn’t do it without you, love.