I’ve been invited to teach at the Golden Gate Fiber Institute in Winter of 2009. The Institute is a joint venture of Judith McKenzie McCuin and Morgaine Wilder, and they’re setting up some seriously intense workshops. You can check their list of Summer 2008 classes for an idea of what caliber of instructors they’re getting; I’m honored and more than a little intimidated. Nancy Bush, Judith McKenzie McCuin, Sara Lamb… I haven’t seen the full list of instructors for the Winter session, but the names that Morgaine told me over the phone were similarly marvelous. I’m particularly looking forward to meeting Takako Ueki, proprietor of Habu – she and I keep missing each other, and I really want to pick her brain about silk.

What they want from me, is a workshop that starts on Monday reeling silk, and ends on Saturday with brocaded ribbons. It’s a pretty tall order – but I feel confident that I can do it. It’s mostly all stuff that I’ve taught before (except for the dyeing) – it’s just that usually I’ve taught it in multiple classes instead of one long course.

I’d love to get input on my ideas for the class, as well as suggestions for a NAME – I really would like something at least somewhat clever, but it must be clearly descriptive as well. I’m kind of liking “From Cocoon to Brocade,” with the details to be filled out in the description – but just not quite sure. 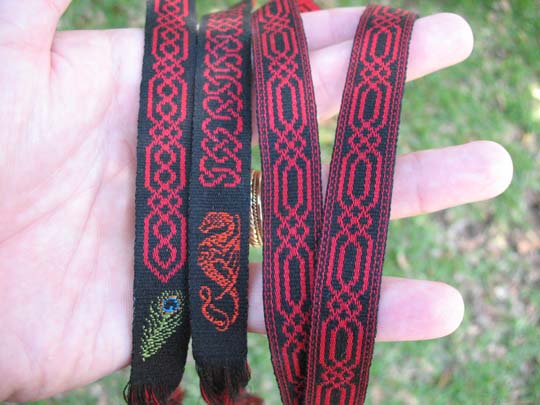 I’ll have a group of 15 for three hours each morning, and a different group of 15 each afternoon. I’ll have the same students all week. Each student will be taking two tracks – which kind of boggles MY mind, but these are seasoned, die-hard textile types. They will have some evening time free, which may or may not be used for practicing and finishing up. So many of these things are very hand-eye-coordination focused, and some of them are also tedious.

First day: Intro to silk, reeling. Each student needs to make several hundred yards of filament. Begin twisting.  Each student will need to produce at least 100 yards of 8-ply tram in order to brocade over 2/30’s silk (this includes plenty of “experimentation” silk).  I’ll need to bring LOTS of spools (I have plenty).  I’ll need multiple stands; may need to rig up a couple of extra ones, besides the pop-together ones. (doubling stands, for making the twisted thread.)  I have 3 silk reels, and can borrow 1 more, but there will be a certain amount of taking turns that will have to happen; they’re just not common enough tools that I can say, “Everybody bring your silk reel!” Students will be able to bring their own spinning wheels, lazy Kates, etc. Again, these are hardcore workshops, and they’ll have most of the stuff that isn’t weird and rare and specific to silk.

Second day: finish twisting, degum and dye. It will take appx. half an hour to boil off the skeins; then we’ll need about an hour for dye work.  I’m aiming for simple, solid colors, no fancy painting or special effects. What I’m thinking, is to have the ribbon warps in student’s choice of three or four dark solid colors – maybe forest green, deep blue, and black – so that the brocade will really pop. I don’t know if I want to teach them double-face as well, or just brocade… I think that having the two techniques together is much more versatile, design-wise, but I don’t know if it would be confusing, class-wise. If we do use two colors, then there would be a contrast color, like bright red, yellow, bright green, etc. I’m planning to get cones of 2/30’s silk already dyed for this, so that we can concentrate on design and working with the tram.

Third day: Intro to tablet weaving: the black-and-white class. This is the same as my usual 15-tablet weaving class, mostly… I will skip Egyptian Diagonals and go into brocade faster, because we’ll be using the brocade technique later on. I want to put away the silk, and work with 2/10’s cotton for this day. This will allow students to get a good grip on tablet weaving basics, how to control the edges, how to manage tension, read designs from a chart, etc. I’ll pre-warp the tablets for this class, as I find it helps students get a better grip on how the mechanics of the weaving work, and they’ll understand better what they want in their own warps.

Fourth day: Design ribbons for brocade and DF. This will be mostly a paper-and-pencil class, with demo of how to use the computer… if students have laptops, they can use Guntram’s Tabletweaving Thingy. I don’t have computers for everybody.  Students who get their designs finished early can start warping for the project. I want to try to stagger out the warping, so that only a couple of students are warping at a time – it takes up more table space than most of the activities, what with the waving of the arms and the tangling of the threads.

Fifth day: Warping up, and start weaving on project.

Sixth day: Continue weaving, hopefully finish the piece, or get to a good point with it.  I can weave a ribbon bookmark with brocade and double-face patterning in 3 hours, but I’m not sure how many new students would be able to.  Hopefully they can get it done, or at least get enough done that they’ll have a feel for it, and can finish it at home.  Fortunately, the tablets are very portable, and they can slip them off the loom for transit.

Do you think this is do-able?  Thoughts, suggestions, cautionary notes? The average background training is likely to be fairly high (i.e., these are mostly people who have been spinning, weaving, working with string for years), but I’ll still be working with people who have probably never reeled silk, and many of them will have weaving experience, but not tablet-weaving.  My concern, is that the scope is too ambitious – I am torn between having a day of teaching design, and using that time for more weaving… I know that the students are more likely to take it home and use it, if they can understand how to draft and design their own patterns.  Likewise, I’m tempted to start them up weaving on the silk – but the cotton is SO much cheaper to mess up on, and I can pre-warp those packs to save time. Also, I’m not sure whether to focus ONLY on brocade, or to include the Double Face, which will allow them a lot more design possibilities.

I had thought about offering the option of sewing thread for those that were very ambitious – but I think we’ll skip that just for ease of being able to see and correct students’ work.

Longer description:
“Silk is a truly spectacular fiber. Working with filament silk is unlike any ordinary kind of spinning – the fiber comes coated with special glue, and the staple length can be over a kilometer! We will start with reeling the filament from cocoons, and work our way through the whole silk process, including throwing (twisting), degumming, and dyeing, to yield a high-shine soft yarn called “tram,” perfect for filling weft, brocading, and embroidery. Instead of a heddled loom, we will use weaving tablets to design and weave ribbons of 2/30’s spun silk, brocaded using the hand-made tram. You can see examples of my work at: wormspit.com – look under “silk work” for the silk processing, and under “projects” for tablet weaving.