Blog - Latest News
You are here: Home / BLOG / Uncategorized / Me and the BEEEEZZZZZ 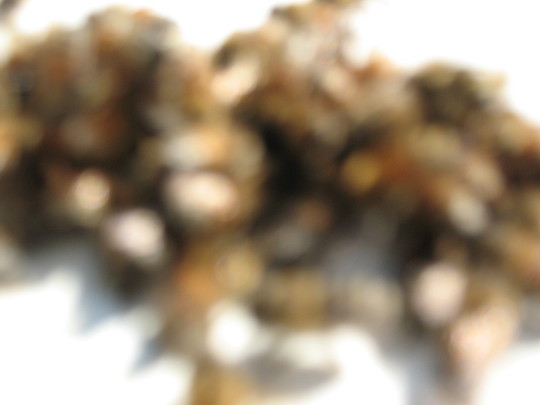 This was a very cool, magical experience for me – but definitely not everybody’s cup of tea. Don’t click here if you’re squeamish about the BEES .

This afternoon, I was cleaning out my car, when I noticed 2 honey bees cruising my (diet) root beer can. Usually this means it’s a tough time for nectar, when the honey bees start going after sweet drinks. It’s too late in the season for almost any flowers to be blooming, but it’s been unseasonably warm so they’re not in the hibernation cluster.

I decided I’d put out a plate with some watered honey on it, and see if they’d eat it. It’s local honey, because it’s just what I had on hand. I went on about my business – had to go to the Indo-Pak grocery, because I’m out of MaWard and MaZaher (orange and rose waters), and then to get my oil changed. I came back, and found this: 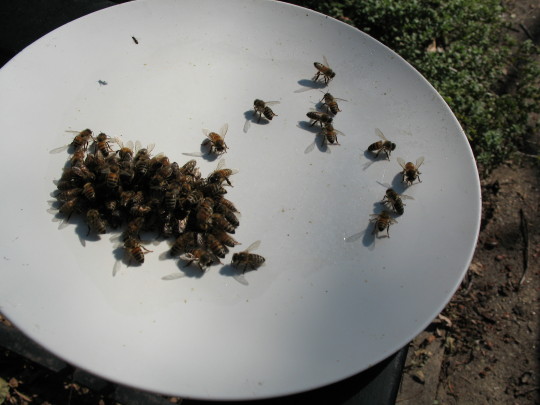 Clearly, the honey was a hit. I was just fascinated watching the bees drinking. 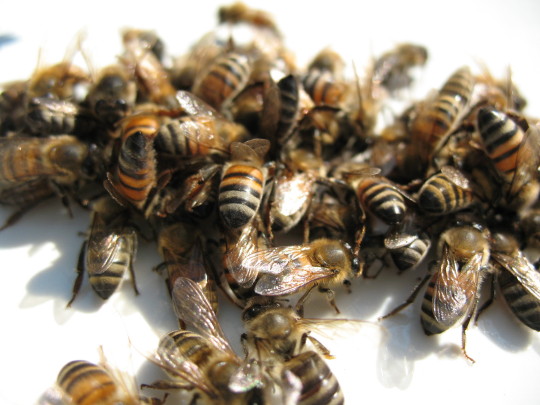 The still pictures make it look like they were placid and quiet. They were not.

It gave me an idea. 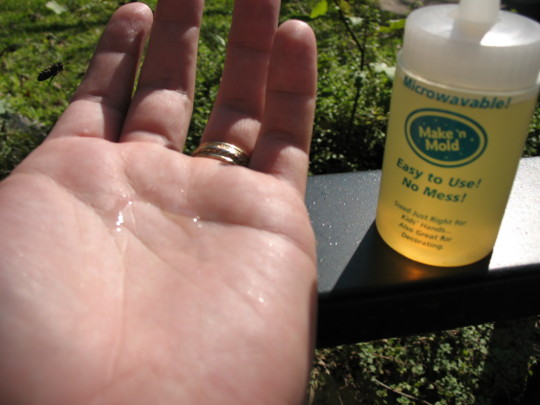 I decided to try just a little, to start with. It seemed like the bees totally ignored it; I wonder if they can smell it. I was holding my hand right over the plate.

I got bumped into by a lot of bees; they were very polite, but so busy and focused that they didn’t watch where they were going. 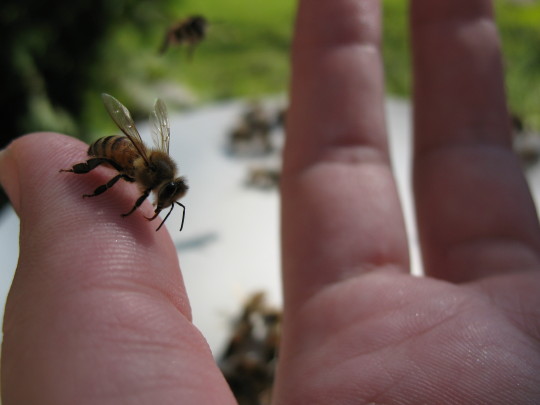 Finally, one bee decided to “scout” my hand. There was a tiny drop of the honey water on my thumb. 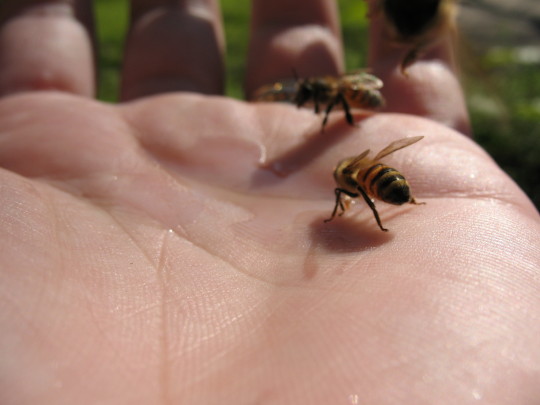 Then, a couple more bees.

After a certain point, they started snow-balling, and it was bee after bee. I’m guessing that word had gotten back to the hive? After this point, bees would land on my hands and check them out, whether I had honey on them or not. 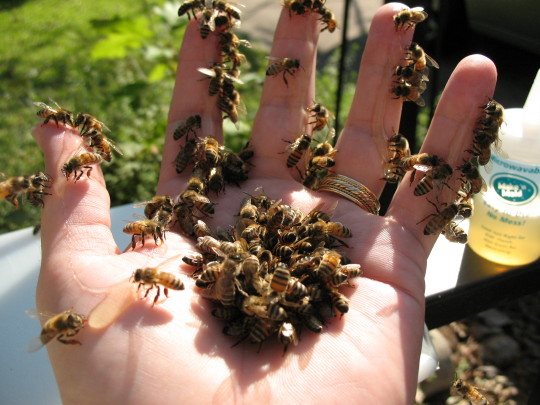 I finally switched to pure honey. I had started with the watered stuff, thinking it would be easier to drink and more like nectar, but the pure honey was easier to stick to my fingers. 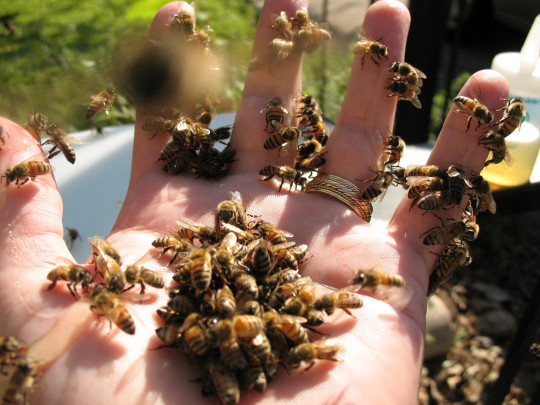 Notice the bee about to hit the lens.

Holding the bees was a very trippy, magical sensation. They didn’t buzz much, but they were wriggly and kind of vibrated. They pushed in to get the honey (notice how many bee butts are sticking straight up!) but never once stung me or one another. A couple of bees got their wings in the honey, and other bees gently licked them clean. There was a powerful sense of polite urgency. 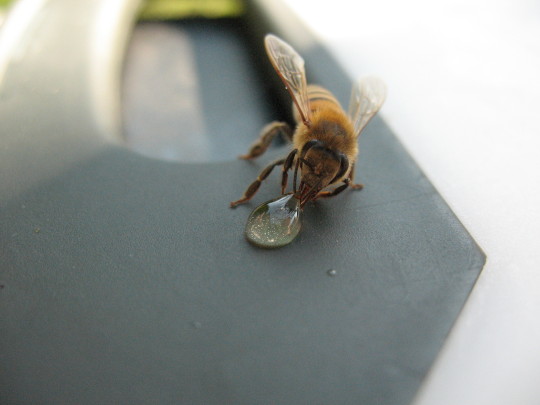 A close-up of one bee drinking.

Bees eating from my hand – this is the honey-water, before I switched to pure honey. 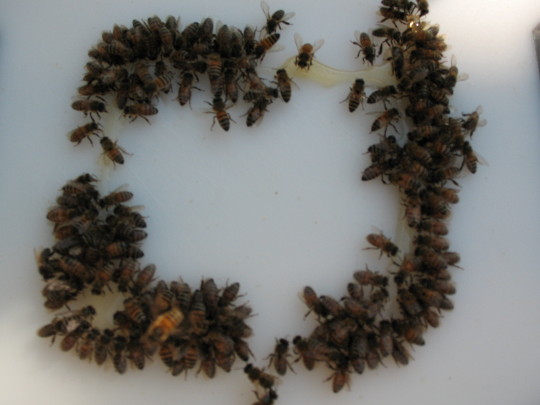 I tried to make “bee art” – but I can tell this is going to take some refinement. I started trying with letters, which didn’t work at all. This “Be Square” almost worked, but the thickness of the honey trail wasn’t even, and the bees didn’t all start evenly across the lines.

ETA: I’ve since been told that the bees should be fed sugar syrup instead of honey; I made up a batch of simple syrup (2 parts sugar, 1 part water by volume) and put it in a zip-lok bag with little holes cut in the top, as a feeder, based on this page:
http://outdoorplace.org/beekeeping/feeding.htm

We're Down to the Final Three…. Kid & Ewe
Scroll to top